Daily Trust Under Fire Over Scathing Editorial on Fani-Kayode 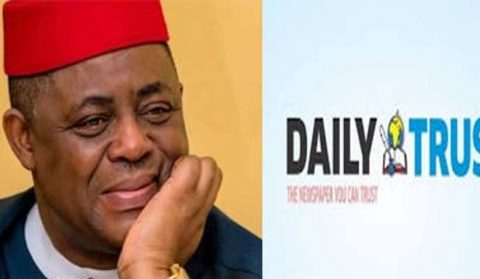 (AFRICAN EXAMINER) – It appears the event that occur between ex-minister, Femi-Fani Kayode and Daily Trust reporter, Charles Eyo, is not going away as the Newspaper on Sunday wrote an editorial about the event and the former minister.

African Examiner had reported how the ex-minister had verbally assaulted the reporter at a press conference in Calabar where the ex-minister was on tour to inspect some projects of Governor Ayade and the reporter had asked who was bankrolling his trips as he had previously been to other states.

The ex-minister lost his cool and instead of answering the question he verbally assaulted the reporter and angrily left the press conference.

A video of this event emerged on social media and Femi-Fani Kayode faced lots of backlash. He later apologised properly for what happened.

However, it appears that Daily Trust are yet to sheathe their swords as again they wrote an editorial about the minister and his past deeds.

In the editorial written by the paper, titled: “FFK, The Drug Addled Thug In Designer Wears”, the newspaper argued that despite the level of education of the ex-minister, it has not reflected in his behavior.

Daily Trust writes: “…..is the perfect example of a pig still being a pig even with a lipstick on.

“Yes, he is on record to have attended the high-brow English public-school Harrow and followed that up with a law degree from the prestigious University of London and a masters from the world famous Cambridge University.

“But if the idea was to mold him in character and training in the best traditions of an English gentleman having attended these institutions of British upper crust society, it has proven to be a waste of expensive English public school education.”

Writing about the event between the reporter and the ex-minister, the newspaper lamented that the ex-minister likes to hurl insults at anyone in the country but won’t like to answer a simple question.

It writes: “Last week, FFK was at his worst during a press briefing in Calabar where in response to a question from a Daily Trust reporter Eyo Charles as to who was financing the trips he (FFK) had been embarking on round the country, he let rip at the poor reporter. Suddenly FFK who takes it as licence to hurl volleys of invectives at just about anyone in Nigerian public life had his thin skin exposed. Like a boxer with a glassy jaw, which the gentlest of jabs was all that was needed to shatter his thinly covered veneer of respectability was ruthlessly exposed.

“In those few minutes of foul mouthed rant at the reporter for asking the question, FFK sunk lower than the lowliest he had ever been in the public estimation of him. He never had any reputation of worth anyways. But it exposed him as a brittle minded fellow who can give but cannot take and confirmed that he is just a windbag and a wanker, worse than the people he all too often vilifies mostly without rhyme or reason.

“With his latest oafish behaviour, it is about time FFK met his comeuppance. His verbal assault at the reporter should be seen as an attack at the very profession that provides him with the necessary oxygen and limelight to remain relevant in the Nigerian public space. If he did to a lawyer in the legal profession, he belongs what he did to the journalist in Calabar he would have faced immediate sanctions. (Ask Governor El Rufai).”

The newspaper also pointed out that the ex-minister has no achievement to show either in the legal profession or in his political career as even members of the political party, PDP, the ex-minister belongs to avoid him.

It added: “Suffice it to say he is not even reckoned with in the legal profession. Even the so-called “charge and bail’’ lawyers one sees often hanging around courtrooms are likely to have better records of achievement in the profession than him.

“He is also not a political figure of note in his native Ile-Ife or Osun State even though he tries to present himself as one. He certainly will not win any political contest there. And in the People’s Democratic Party (PDP) of which he is a member, he is avoided like the plague for his impulsive, self-opinionated, gaffe-prone statements which often put the party in bad light, and which necessitate painstaking damage control measures to mend.”

It called on the Nigerian media to refrain from giving the ex-minister attention just like the NBA did to the governor of Kaduna State, El- Rufai.

It concluded: “If the journalism profession in Nigeria has any modicum of honour at all it must put this designer wearing, drug addled thug in his place as an example to all who dare to treat it with levity.”

However, this editorial, has sparked reactions from Nigerians on Twitter as many says Lai Mohammed, the Minister of Culture and Information, has done worst as it was once reported that the minister locked up a journalist, yet the NUJ did not boycott his activities and nothing was written about him.

African Examiner captures some of the tweets below.

Ayekooto@DeeOneAyekooto writes: “If it was Lai Mohammed that said a Journalist is stupid, by now, Wailers will be asking GMB to resign at Unity Square and calling for Revolution.”

Jackson Ude@jacksonpbn writes: “Nigeria didn’t create any job for the youths. All the 3million a year job promised by the APC/Buhari ended up a lie. Nigerian youths have now taken their destiny into their hands, embracing #bbnajia2020 to make some bucks but sadists like Lai Mohammed wants it shutdown!”

IKECHUKWU@iykimo writes: “Lai Mohammed and the APC gang are happy now? When the righteous are in power, the people rejoice.”

@ClassiccKing writes: “Lai Mohammed no do reach like this.”

IBIAM @official_ibiam writes: “Hahahaha…FFK has bitten more than he can chew. Now, he’ll understand how powerful the men with paper and ink are.”

Souljah@jeffphilips1 writes: “Just so you know, what Daily Trust meant by FFK being drug addled is that he’s a drug addict who’s mentally confused. Daily Trust wrote that editorial like they found Shekau and they received the directive to kill him. FFK cannot come back from this no matter how he struggles to.”

Irebuleke™@irebuleke writes: “The biggest mistake @realFFK made was to apologize. How I wish he didnt.. Low budget newspaper @daily_trust Can’t hv such media nuisance on my tl..”

African Examiner reports that on Friday, before the scolding editorial, Mr Femi Fani Kayode had apologized for the verbal attack on Mr Eyo Charles, a Daily Trust reporter.

He said: “I’m deeply sorry for the manner I reacted to the said reporter. I was too hard on him. The question was mischievous, but I fell for it.”

“I should have been smarter than that. I am using this opportunity to reach out to him, and I hope he will be kind enough to forgive me. I disappointed myself, my family and friends, my colleagues and even my bosses, those who hold me in high esteem.

“I have regrets; it was not my finest day. No leader or public figure should ever react like that. I disappointed myself. I deeply regret it and I believe it will never happen again.”