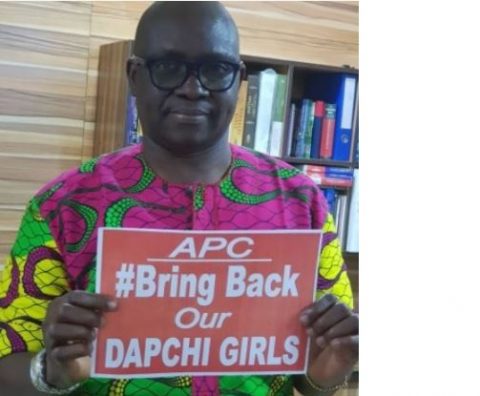 (AFRICAN EXAMINER) – Ekiti State Governor, Mr Ayodele Fayose has described the abduction of the dapchi schoolgirls as an indictment on the federal government and their release as “drama scripted by the government and its agents to swindle Nigerians.”

The governor, however,  congratulated parents of the abducted Dapchi Girls that were released Wednesday and sympathized with parents of five of the girls that reportedly died.

Fayose, while reacting to the release of the abducted school girls, said; “This appears like an arranged abduction and an arranged release, but we thank God that the innocent girls have returned home

and we condole with parents of those that died.”

In a statement issued on Wednesday, by his Special Assistant on Public Communications and New Media, Lere Olayinka, Governor Fayose said it was strange that the girls could be brought back to Dapchi by their abductors without the security agents knowing when they were returned and who returned them.

“Curiously, the same spirit who made sure that all military checkpoints in Dapchi and other surrounding towns were removed to pave way for abduction of the girls also made sure that the girls were returned without any security agent seeing them.

His words: “One can only be hopeful that the real script writers behind this drama will be exposed one day.

“Nigerians should recall that the Governor of Yobe state, Ibrahim Geidam said that military checkpoints were withdrawn from Dapchi and other communities a few days before the abduction of the 110 girls.

“Specifically, Amnesty International said that security forces failed to act on advance warnings that a convoy of Boko Haram fighters was heading to Dapchi town and that between 2:00 pm and 6:00 pm on February 19, 2018, calls were made to tell the security services that the Boko Haram insurgents were in the Dapchi area.

“No doubt, withdrawal of military checkpoints from Dapchi and other communities, few days before the 110 students were abducted and failure of the security forces to act on advance warnings exposed the conspiracy of the federal government and its agents in the abduction of the school girls and other dastardly acts of the insurgents.

“Interestingly, no one was questioned up till now despite conflicting claims by the army and police as well as the damning report by the Amnesty International hat between 2:00 pm and 6:00 pm on February 19, 2018, calls were made to tell the security services that the Boko Haram insurgents were in the Dapchi area.”

The governor, who reiterated his allegation that Boko Haram insurgency had become source of treasury looting; said; “Those benefitting from Internally Displaced Persons (IDPs) scams, payment of ransom (in dollars) to free those abducted by the Boko Haram insurgents, among others will never wish to see the end of the insurgency.”