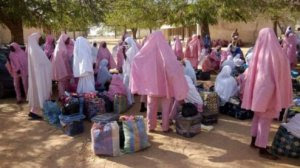 (AFRICAN EXAMINER) – The Inspector General of Police IGP Mr. Ibrahim Idris has retracted his earlier statement confirming the release of one of the remaining out of the 111 abducted Dapchi girls, Leah Sharibu

Speaking through the Force Spokesman Mr. Jimoh Moshood in a statement issued in Abuja Sunday, the IGP denied ever making such confirmation that young Sharibu would regain her freedom today (Sunday), claiming he was “misunderstood” and quoted out of context.

He made the assurance in an interview with journalists in Maiduguri, the Borno State State capital. IGP told newsmen that he knew that Sharibu would be released, noting that was why he did not visit Dapchi so as not to jeopardize the operation.

According to the Force PPRO, the IGP reversed himself and said: “The comment of the IGP was misunderstood and misquoted. The misunderstanding may be as a result of the already released Dapchi schoolgirls expected back home in Yobe State today (Saturday) but could not arrive due to weather condition.

“The IGP could not also proceed to Dapchi because of same weather condition. The Force wishes the members of the public and the media to disregard the purported statement as not what the IGP meant.”

“The Force therefore reiterates that it has no information yet on the release of the last Dapchi school girl”.

In a related development, the Minister of Information and Culture, Alhaji Lai Mohammed noted that a total 111 (as against 110 earlier announced) girls were abducted from Government Girls Science and Technical College GGSTC, Dapchi Yobe State.