Delta Community Demands Justice Over Killing of Their People 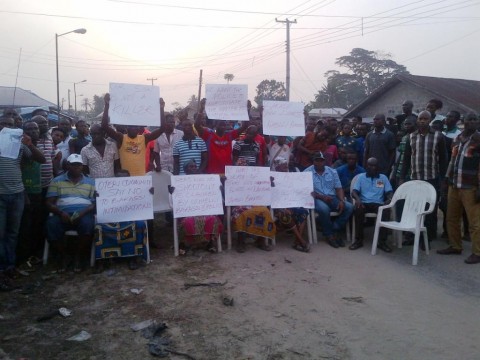 From Ignatius Okpara, Asaba – The people of Oteri community in Ughell North council Area of Delta State, on Monday staged a protest over alleged Extra Judicial Killing of its people.

They had during the protest demanded a probe into the killing of the community’s vice Chairman, one Mr. Blessing Unusiefe.

The aggrieved community also called on the Inspector General of Police, Suleman Abba, as well as Delta State commissioner of police, Yakubu Alkali, to carry out thorough investigation into the deaths.

The angry protesters, were seen carrying placards at the town hall with various inscriptions, expressing their disappointment over the inability of the Police to probe the circumstances that led to the murdering of the community leader in a cold blood.

Some of the placards reads: “We want the corpse of Oteri’s vice chairman, Blessing Unusiefe,”

“There was no shootout as claimed by police, Ughelli Bakassi,”

”Oteri community says No to Bakassi intimidation,” “The police should investigate the killing.” amongst others.

Speaking with newsmen, president of Oteri community, chief Bateri, hinted that they decided to embark on the protest following the intimidation and injustice being meted out on the community by security agents.

He noted that the police were covering the plot into the killing of their son.

“The Ughelli Vigilante invaded the community on February 3, shooting sporadically without the community knowing what was happening. he stated.

“They shot the vice chairman and took him away. They claimed Unusiefe was involved in the killing of one Michael Onajiyovwe.

” I can assure you, Oteri is not involved in any criminal act,” Bateri” insisted