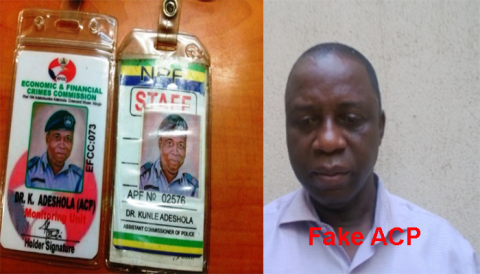 The Economic and Financial Crimes Commission, EFCC has arrested, one  Kunle Adeshola a self-acclaimed Assistant Commissioner of Police who has been parading himself as an operative of the Commission and defrauding officials of government agencies under the guise of conducting phantom investigations. 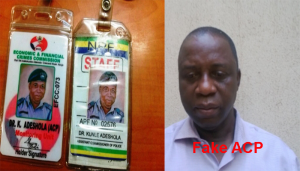 In a statement by Wilson Uwujaren, acting Head, Media & Publicity of EFCC, the serial impostor was nabbed on Thursday, October 10, 2013 in the course of trying to brow beat the Chief Executive of a federal government agency to write a letter supposedly to the Inspector General of Police to second him to the agency.

When he was arrested, two fake identity cards were found on him, one of the cards bearing the name Dr. K Adeshola (ACP) identifies him as a staff of a non-existent EFCC Monitoring Unit while the other is a police ID card with number: APF NO. 02576 with the name, Dr. Kunle Adeshola.

A search in his apartment in Lugbe, a suburb of Abuja yielded a number of documents suspected to be fake. They include copies of NYSC Discharge and Exemption Certificates and blank copies of University of Jos certificates.
Adeshola, who claims to hold a doctorate degree in Criminology from the University of Maiduguri, confessed to bearing several names. He parades himself as Dr Kunle Shoal, Dr K. Adeshola ACP, and Sunday Mealayeshe Adekunle.

Investigations reveal that it was not the first time that the suspect would be impersonating law enforcement officials and duping unsuspecting officials of government agencies and members of the public.

The Commission, therefore appeals to those who have been duped by the suspect in similar fashion to come forward with information, as investigation into the scam continues.