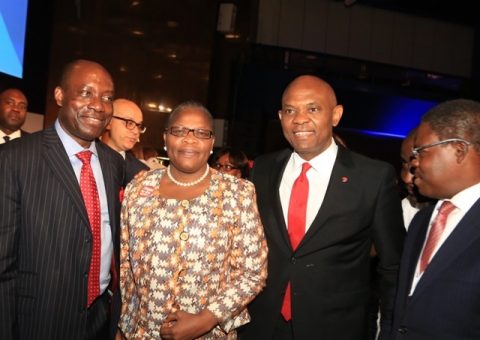 (AFRICAN EXAMINER) – Chairman, United Bank for Africa Plc,  Tony O. Elumelu, has hailed the African Finance Corporation on its various initiatives and contributions  targeted towards supporting African economies in the last few years noting that these initiatives have gone a long way in fostering growth and diversity on the continent.

Elumelu , who gave this commendation during the AFC’s 10th Anniversary celebrations of the corporation  in Abuja, Nigeria this week, was also full of praises for the corporate governance culture exhibited and practiced by the AFC, adding that its impact has been felt not only in Africa, but by the world over.

The UBA Group chairman who was honoured and recognised at the event as a long serving board member of the AFC, said, “As a pioneer chairman of Risk and governance at the AFC, I interacted closely with management and the AFC has world class leadership and management. We have seen great seeds planted. This is indeed an African institution domiciled in Nigeria with world class standards’ he said as he referred to the Triple A rating of the AFC.

Having served on the board of AFC for 9 years, he shared his vision and hopes for the corporation in the next 10 years as he sat on a panel titled The foundation for growth, alongside the former Nigerian President Olusegun  Obasanjo and the Former Central Bank governor of Nigeria, Professor Chuwuma Soludo. ‘The commodity crisis has demonstrated that we need to attract more capital to Africa and I would like to see the AFC mobilizing much needed capital to the continent as we engage with our political leaders to create the enabling environment for growth and development’ Elumelu said.

Acting Nigerian President, Prof Yemi Osinbajo, who had earlier opened the AFC’s summit on Infrastructure revolution, commended Obasanjo, for his clear vision in conceiving the idea of an African Development Finance Institution that would be birthed on the continent; “the idea of developing a wholly African Finance Institution that was the will of African leaders, nations and institutions, seemed far – fetched a decade ago’ he said. He expressed pride that Africa was on the right path. ‘This coming decade is Africa’s time’ he stated, saying that the world would be seeing real development on the continent in the next few years.