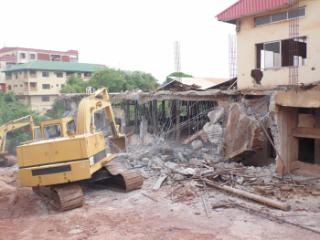 At last, Enugu state government has demolished the controversial magnificent multi-million naira regional headquarters of the Mountain of Fire and Miracle ministry church, Enugu, after a prolonged legal battle. 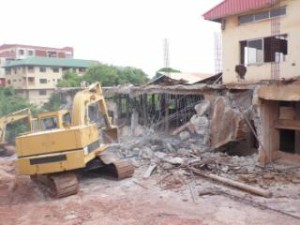 Mountain of Fire Church pull down by Enugu state government

Officials of Enugu capital Territory Development Authority ministry, who carried out the exercise arrived the church premises at about 9am on Tuesday

The ferocious prayers of worshipers, who had gathered at the church before the demolition commenced, could not stop the government officials from pulling down the edifice.

While the worshippers were in the church observing their prayer session, bulldozers were busy pulling down the structures.

African Examiner gathered that the over 5000 capacity church building which had been occupied by the church in the last fifteen years was the first branch of the church in the South-East and South-South geo political zones of Nigeria.

The church located few metres away from the Zik Avenue bridge on Uwani had become a subject of contention since the incumbent Sullivan Chime led administration came onboard.

Government had said that the church building was not only wrongly sited but constitutes a barrier to the flow of Asata River.

African Examiner recalled that same time last year, government moved to demolish the structure but was prevented from doing so by leadership of Christian Association of Nigeria (CAN) and other church leaders in the state who asked government to relocate the church to an alternative place if it feels strongly that the premises was wrongly occupied.

The church, had equally gone to court to stop the demolition at that time.  Later, government was reported to have given the church 20 plots of land at Emeka Ebila Road for their relocation, but the church felt it should be backed by cash to enable it rebuilds the multi-million naira church, especially as it allegedly had necessary documents and approvals backing its ownership of the land and the church building.

Worshippers at the church, had refused to leave the church hall when the officials asked them to move out, saying they would prefer to be buried with the collapsing walls, but had reneged when they discovered that the demolishers were determined.

Addressing newsmen at the church premises, Pastor Kenedy Ude Ogaranya, regional pastor of the church, described the exercise as an abomination and as a rape of justice.

His words: “Actually, this is a rape of justice, this case has been in court since September last year, we are yet to get justice, the judge is yet to deliver judgement on this. This is totally contempt of court; this is an abomination” he declared.

“The land they gave to us was in dispute between the Ngwo people and the Amaechi people, so they could not allow us to move into the land; I wrote to the Inspector General of Police and the Enugu State Commissioner for land; they asked the Ngwo people to keep off and just this Saturday, we had access into the land for the first time, we were able to put our pillars and clear the land.

“So, we are yet to enter the land properly and Monday, they came here and gave us three days notice, to quit this place in three days, you gave us a land on Saturday and today being Thursday, you are pulling down the church of God; it is to us a rape of justice against the body of Christ.

“All our materials are inside, musical instruments, seats, worship items, all our properties, how can we remove them when the two bulldozers are already pulling the structure down”.

“Yesterday, I went to the office of the Attorney General of the State, the Commissioner for land, have them letters, asking them to give us more time that we just moved into the land on Saturday, but all our pleas fell on deaf ears. We entered that land on Saturday, it was on Friday that the commissioner spoke to Ngwo people to stay clear of the land, and on

But  Justifying the demolition, the commissioner for ECTDA, Engr. Iyke Ugwegede said that it was done in respect of development control activities of the authority.

Ugwegede said the structure is about 2100 square metres plan size erected on two plots of land located with a total area of approximately 2000 sq metres, stressing that the structure was illegal and unapproved as an application for approval was considered and rejected in March 2012.

He gave reasons for the rejection of the application to include; the church’s overbuilding of the property with more than 100% built upon encroaching into stream and road reserves; construction outside the purpose clause of the property as the area was designated for commercial development and not for institutional use.

The government also said there is evidence of structural inability as there was palpable evidence of failure of some of the reinforced concrete elements of the northern end of the basement area of the structure, adding that it had given copious opportunity to the church to make good the illegality ever since then.

The commissioner, also hinted that it had given the church an alternative land allocation of more than 400sq metres, saying government believes in protection of all and sundry in the state especially with the un seasonal rains and floods of this year resulting in the collapses of three buildings within the capital territory and the loss of one woman and unborn child.

“No responsible government will stand and permit a predictable catastrophe to befall its people before taking appropriate steps.

The state government had also identified other structures which must be brought down to prevent any unsafe condition or illegal structure from remaining,” he stated