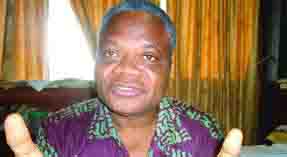 Ahead of the proposed national conference, former president of the Academic Staff Union of Universities (ASUU), Dr. Oladipo Fashina, have said the parameters of ethnic nationality which the conference is placed will not work.

Fashina told African Examiner in Lagos that many who are clamouring for national conference of ethnic nationality invariably are saying it is ethnic groups that should be represented at the conference.

He argued that Nigeria is made up of social classes. “If you look at the country, the social classes in it are about three or four but when you talk about ethnic groups, in Taraba and Adamawa States alone, they have over one hundred, so which one will you take to represent its people”, he added.

In the same vein, the former ASUU president asked, “If the conference is going to be place on the basis of ethnicity, who will determine who represent me or my group at the conference.”

In his word, “Nobody can speak for me. If I belong to a political party, then the party can speak for me but for somebody to now come and choose some ethnic leaders, that is our greatest challenge in this country.

Dr. Oladipo Fashina, however called those seeing the country from the angle of ethnic nationality to note that Nigeria have gone beyond the ethnic groups they are talking about. “We have political parties, let people go and form their own political party based on economic-private interest  that allows them to come from different parts of the country with different interest to vie for power, not referring to groups when it comes to things like this which also portray us not yet develop”, he concluded.