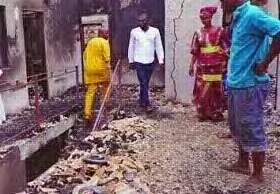 The entire Umuodo community in Itu, Ezinihitte Local Government Area of Imo State was monday thrown into confusion, as a woman identified as Patience Chilekezi, set her self and husband, Mr. Ngozi Chilekezi, ablaze so as to prevent him from marrying another wife.

Picture of the burnt house

The couple, African Examiner gathered has been childless since they got married and have been living together for the past 12 years.

It was also gathered that before the ugly incident occurred, the late woman had allegedly concluded plans to elope with another man, but the plot leaked to her husband, who allegedly confronted the man and started making plans to take another wife.

However, while some members of the community claimed that cans of fuel stored in the house suddenly went up in flames, others said the woman poured fuel in every part of the building before inviting her husband to the house for a chat, and immediately the man came in, she scratched a match and the entire house went up in flame which consumed the duo.

Fortunately, the husband, who was seriously burnt at the time he was rushed to a nearby hospital by neighbours, was able to narrate what happened to his relations before he gave up the ghost.

Late Chilekezi, told his relations that he was invited into their living room by his wife at about 1.30 p.m that for a chat.

According to one of the relations, Chilekezi told them before he passed on that “on entering the room, his wife poured fuel on him, as well as lit a match on him, and held him tightly so as to ensure that he did not escape from the evil plot,” he recounted.

The source said immediately the flame covered Chilekezi, who was a relatively comfortable automobile technician, he managed to extricate himself from his wife’s grip and ran out of the burning house, adding that he was quickly rush to a nearby hospital for medical attention.

He said their late brother also told them that his wife was equally trapped in the burning house but before people could get back to the house, the woman was already burnt beyond recognition.

Meanwhile, as at the time of filing this report, the charred remains of Mrs. Chilekezi was still in the burnt house, while the husband’s body had been deposited in an undisclosed mortuary.