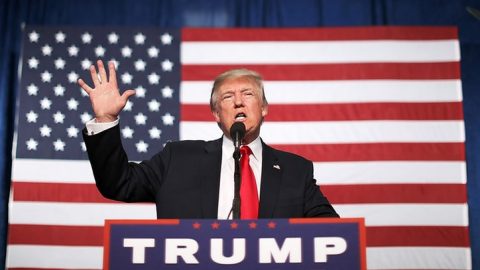 (AFRICAN EXAMINER) Facebook on Thursday took down Trump campaign ads that featured a symbol used by Nazis to designate political prisoners, saying the posts breached the platform’s policy on hate.

“We removed these posts and ads for violating our policy against organised hate,’’ a Facebook spokesperson told dpa in an emailed statement.

“Our policy prohibits using a banned hate group’s symbol to identify political prisoners without the context that condemns or discusses the symbol.’’

“Using it to attack political opponents is highly offensive.

“@POTUS’ campaign needs to learn its history, as ignorance is no excuse for using Nazi-related symbols.’’

The Trump campaign sought to deflect criticism by saying the red triangle is “a symbol widely used by Antifa’’.

Facebook has been under fire for its hands-off approach to political advertising, largely exempting politicians’ posts from fact checks.

Facebook boss, Mark Zuckerberg, recently pledged to review the social network’s policies, after coming under pressure from the public and his own employees after Twitter placed a “public interest notice” on a Trump post for violating the platform’s rules “about glorifying violence”, a move not mirrored by Facebook. (/NAN)