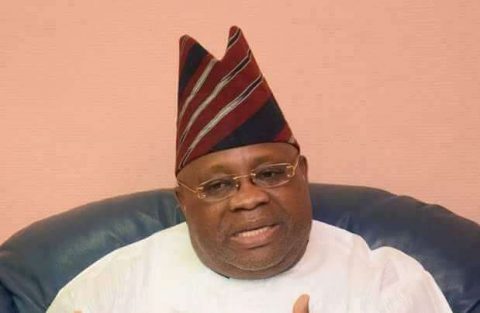 Adeleke was the governorship candidate of the Peoples Democratic Party (PDP) in the Sept. 22, 2018 Osun governorship election.

Adeleke, who is a serving senator and four other defendants were first arraigned on a four-count charge before Justice Edward Ekwo in September.

Adeleke and the other defendants pleaded “not guilty” to the seven count charges following which the prosecuting counsel, Mr Simon Lough asked the court for a date to commence trial.

Adeleke’s counsel, Mr Alex Izinyon (SAN), however, prayed the court for time to respond to all the processes served on his client.

The judge ruled that Adeleke should return the International Passport within three days of his return to the country.

The News Agency of Nigeria, (NAN) report that Adeleke was arraigned in September on a four-count charge on examination malpractices, along with his brother, Sikiru Adeleke and three others.

The senator pleaded not guilty to the charges and was granted bail on self-recognizance by the court.

As part of his bail conditions, Adeleke was to sign an undertaken to always attend trial and was not to travel out of the country without the permission of the court.

The second and third defendants were admitted to bail in the sum of N2 million each and one surety each, in like sum.

They were also asked to submit their international passports to the court and were not to travel out of the country without obtaining permission from the court.

Justice Ekwo ordered that Gbadamosi Ojo (school Registrar) and Dare Olutope (a teacher) be remanded in prison custody since they did not apply for bail.(NAN)