Governor Babatunde Fashola of Lagos State is currently at war with the Federal Government with the central government releasing soldiers to stop the Lagos State Government from developing housing estates for its citizens. 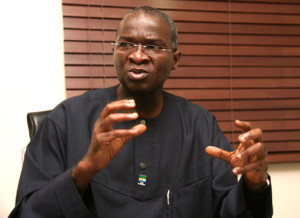 The Federal Government is claiming ownership of the land the state government is erecting housing estates, with Fashola refusing to surrender.

At his 2,500 days in office on Wednesday, Fashola revealed that the federal government has gone to put its signboard at the Ilubirin Foreshore, Lagos Island where the government is building 1,188 flats, claiming the land belonged to the central government.

“This morning on my way to work, I observed at the Ilubirin, where we have started the construction of 1, 188 flats, somebody has gone ahead to put the sign of the Federal Government at the site claiming that the central government owns the land.

“That land has been there for the last five years, the contract for reclaiming that land was issued by the Lagos State Government to Julius Berger Plc during Asiwaju Bola Tinubu’s administration.

“In January, we awarded contract for the construction, suddenly the federal government realized and began to claim the ownership of the land. I was told that Senator Musiliu Obanikoro, the new minister, was there last Saturday with soldiers. That is what the residents of Lagos get for 1.2 million votes cast in favour of the president Goodluck Jonathan in the last election,” he explained.

Also at the Oyingbo Market, which is being constructed by the state government, Fashola disclosed that the Federal Government has used soldiers to stop work from going on.

“The contractor at Oyingbo has stopped work. And it is because some agents of the Federal Government have moved soldiers there. They are claiming that they own that land. The land is the land next to Mainland hotel. That was part of the land that Brigadier Mobolaji Johnson acquired during his tenure as governor of Lagos State and when Alhaji Femi Okunnu was Federal Commissioner for Works.

“And in documents handed over to the Lagos State Government, Okunnu clearly indicated that the land belonged to Lagos State Government. The land has been unused for many years. It was until we started the Lagos HOMS initiative, when we decided to build 48 flats there. We started building, then people came with soldiers and said that the land belong to the Federal Government. So that is the reason why the contractor isn’t working any more. They used soldier to stop the contractor from working,” he said.

On the issue of ministers representing Lagos State, Fashola said he did not believe that Lagos has two ministers at the federal level as Mr. Olusegun Aganga could not claim to represent Lagos as he is from Edo State.

“Lagos doesn’t have two ministers. Under this administration, Lagos just has its fair share of the ministerial appointment two weeks ago. Mr. Olusegun Aganga doesn’t represent Lagos. I think it is section 147 of the 1999 constitution that provides that every state should be represented by a minister and the person should be indigene to the people of that state.

“For me, Aganga is from Edo State. To his credit, he has supported Lagos State initiative, especially the Lagos Free Zone, LFZ. At the last election, the president won election in Lagos state with 1.2 million votes. All the other states got minister except Lagos State. Until two weeks ago when they realized that 2015 is close by, that is the reward for the vote the president got from Lagos State.

“As if that wasn’t bad enough, we were given junior minister. That is the reality. But some states that had the population less than the number of vote cast for the president in Lagos got full minister. But perhaps, another important point is that my understanding of that provision is that it isn’t different from intent, the idea of sending representative to the National Assembly,” he said.