Editorial Comment…And There Were Surprises in the Ekiti Gubernatorial Election 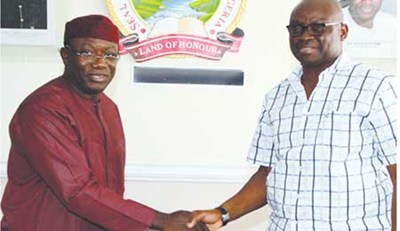 I have put up a poser: “Ekiti kete Guber Election; Any Surprise Expected?” in the headline of pre-Ekiti last Saturday’s (June 21) gubernatorial election commentary. Specifically, the editorial was first posted on Thursday June 19 (as a sub story) and was re-posted (alone) on the Election Day.

Well, the election has been conducted – winner and losers have emerged. Indeed, there were surprises (given the facts of history) articulated in the analysis. At the end of the highly policed but peaceful exercise, the Peoples’ Democratic Party’s (PDP) candidate and former Governor of the state (2003-2006), Mr Ayodele Fayose was declared by the Independent National Electoral Commission (INEC) around 4am on Sunday, June 22, the winner and returned, having scored total of 203,090 – the highest votes in the election in which over 400,000 voters with permanent voters’ cards were expected to participate. The winner defeated the incumbent Governor Kayode Fayemi and candidate of All Progressive Party (APC) who polled 120,433 votes to come second, while Opeyemi Bamidele, the Labour Party (LP) standard bearer could only muster 18, 135 votes to be declared the distanced third. 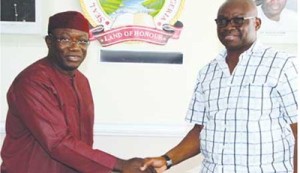 Indeed, the outcome was surprising – betrayed the calculation and expectation of not a few pundits as the incumbent Governor failed to win in none of the 16 local council areas of the state. And while many watchers and analysts were still gripped with the initial shocks of the outcome of the election and amidst analyses of the exercise came via the various social media handles the text of address signed by Governor Fayemi’s Chief Press Secretary, Olayinka Oyebode and read by the Governor in a statewide broadcast on Sunday – some hours after Fayose was returned.

Fayemi according to the address congratulated his successor, saying “he has no option than to accept the result of the election and congratulate Fayose if indeed the outcome …is the will of the Ekiti people”. He went further confirmed that, he had called Fayose and congratulated him on his victory, while also indicated plan to meet the Governor-elect “to discuss the future of our dear state and how we would work together to institute a smooth transition programme”.

The issue here and at this juncture is not about the party nor the political leaders, rather, it is about the personality at the Centre of the discourse – the sitting Governor Fayemi and his score cards. It has been argued that Fayemi’s failure was on the account of some salient factors.

For instance, the outgoing Governor has been accused of disconnection between him and the grassroots – the commoners. Personally, I feel this point is debatable majorly because from all indications, it can be confirmed that all through his about to end four years tenure, he maintains a constant constituency/community parleys, of his stewardship account and to receive feedback from the people. He (Fayemi) had said this exercise is carried out every November and nobody has contested this assertion.

Despite this, Governor Fayemi failed in his relationship with the State civil servants or better put, a section of them. A confirm report had it that the public servants so far have never had it so tough as they have been subjected to harrowing experiences by the outgoing administration. The situation is so bad that the public servants receive their salaries in arrears – April salary recently paid. In a communal state like Ekiti, where the major means of livelihood are civil service, farming, trading and so many small scale enterprises, such policy is an error and damaging to the image and future of an administration.

Unfortunately for Governor Fayemi, he had in the contest not only a former Governor, but an applauded mobilizer and one who finds joy in relating and identifying with the grassroots. These are the attributes found in Ayodele Fayose. Democracy as said is a game of number. This fact pre-supposes that everybody and every aspect of the society matters to woe people and get their nod for votes, it does matter, how sincere, diligent, brilliant or committed, you do not take any part for granted. It appeared that Fayose beside his popularity among the people couched on the lapses coming from Fayemi and his camp to get majority of the voters during the last exercise to his side. And His typical Nigerian brand of politics (sharing of peanuts) among the people played out at mainstream of the electioneering campaign. His supporters (governor-elect) were seen queuing and collecting “Fayose” branded rice. Ironically, this seemed not matter to Fayemi, but shockingly it did work for the winner of the election. This again confirms high level of poverty and illiteracy in our society.

And obviously due to unpleasant manner they are being handled, the civil servants in the state, newspaper reports alleged swore to an oath to vote for Fayose. Still, another factor that worked against Fayemi was accusation that he failed to localize award and execution of major projects in the state. This allegation can also cause wrangling even within his party.

Again, may we ask, is the June 21 Ekiti gubernatorial election was really free and fair. To some extent, the voting was free and peaceful. Yet, the total fairness of the exercise is doubtful. For instance, the militarization which ensued on Thursday, June 19, barely 48 hours to the election, is questionable and disturbing. In the confusion, three sitting Governors – Rotimi Amaechi (Rivers); Adams Oshiomole (Edo) and Rabiu Kwakwaso (kano) were either barred from entering Ado-Ekiti or taking off from their local airports to Ekiti State capital for the grand rally of the outgoing Governor by the Military men and other security operatives. The officers were quoted as saying the Governors were not given clearance to fly and they (security) were acting on orders from the above.

Similarly, party (APC) key stalwarts were rounded up in different parts of the state, on the eve of the election. The outgoing governor himself and some election observers were not spared in the harassment as there were alleged sporadic shooting around his (Fayemi) house in Oye local Council, while the security men stormed the apartments of observers ransacking their luggages and everywhere. Some journalists were also harassed.

Of course, allegation were made that key ruling party members (Deputy Governor, Professor Modupe Adelabu and Engineer Segun Oni’s driver) were distributing money to hoodwink the voters. And on the Election Day, came the dimension of the “busy bodies” in Governor Fayemi’s description. The governor alleged that contrary to the argument, questions and complaint by PDP on the rationale behind the presence of some APC governors for Fayemi’s final rally, the trio of Minister of State for defence, Musiliu Obanikoro, Minster of Police Affairs, Jelili Adesiyan and controversial Chris Uba were actually in Ekiti and seen cruising around. The party’s Osun gubernatorial candidate, Senator Iyiola Omisore was also speculated to be in town while the election lasted. All these are indices of imbalance, especially on the part of PDP, who unarguably used the federal might to its advantage.

With respect to heavy security presence before, during and after the election, the situation remains abnormal in a civil society. However, we may not rule out the fact that the exercise would have probably gone either way if such abnormal measure was not put in place. This again underscores poor level of political education and advancement in the country.

Now to the political parties, political office holders and party leaders, the just concluded Ekiti governorship election was an alarm bell – there is need for them to come to terms with some of their undoing. This is the time for party leaders to begin to think and consider shelving their over bearing tendencies and allow internal independence and democracy to reign. If they fail, they should expect further havocs within the ranks and files of their parties. The party heads should realize that in this clime, people do not vote for parties, rather the party flagbearers. So, if a party messes up with a popular candidate and loses him/her to another party, the possibility is more that same candidate will win conveniently no matter how invisible the political platform he runs may appear.

Finally, to the newly-elected Governor of Ekiti; Fayose should regard this fresh mandate given to him as another golden opportunity, therefore should not for selfish reason allow it slip off his hands. He should recall the circumstances, pains, crises, humiliation, intimidation and confusion that trailed his unceremonious exit from office in 2006 during former President Olusegun Obasanjo’s second tenure. Therefore, the best Fayose can do for himself, his family and most importantly Ekiti, is to strive and move the state forward and put it on honourable pedestal which it is. Also, it is very important he does not repeat previous blunders. Once bitten twice shy.