Fight Between Conductors Led to Train Crash Killing 25 in Egypt 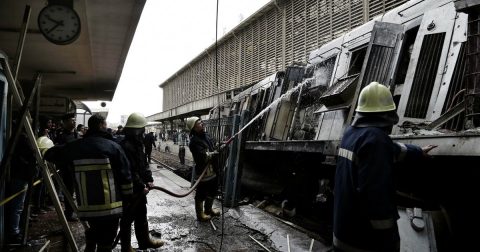 (AFRICAN EXAMINER) – No fewer than 25 people have been killed while 50 others injured by a large fire at the main railway station in Egypt’s capital Cairo.

The National Railway Authority confirmed that a train collided with a concrete buffer stop at the central Ramses Station.

It said the train’s fuel tank reportedly exploded after the crash, setting a platform and nearby buildings alight.

Prime Minister Mostafa Madbouli visited the scene and said the cause of the collision was not yet known.

However, he vowed to punish severely anyone who was found to be negligent.

“We will identify who is responsible for the accident and they will be held accountable,” he said.

Photos and videos posted on social media appeared to show the train and the platform it hit engulfed by fire, as well as people rushing to help the casualties.

“I was standing on the platform and I saw the train speed into the barrier,” an eye witness Mina Ghaly said.

“Everyone started running but a lot of people died after the locomotive exploded.”system reportedly has a poor safety record, which many people blame on lack of investment by successive governments and poor management.