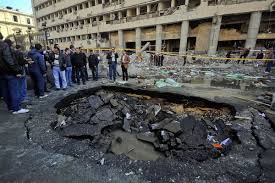 A domestic bomb placed in a government construction site on the outskirts of Cairo exploded Saturday, killing a girl and wounded her mother.

An Egyptian security official said assailants placed the device in a government telecommunication building under construction in 6 October district pointing out that the girl’s mother, who is the wife of the building’s guard, was wounded in the explosion.

Source told CBC channel that the explosion damaged a mobile communication tower, cutting off access of not less 800 than clients.

In a separate incident, gunmen had reportedly killed two civilians late on Friday in the town of el-Arish located in the northern part of the Sinai Peninsula.

Another security official said the assailants opened fire outside a police officer’s home as he was escorting two technicians outside. The officials spoke on condition of anonymity as they not directed in that regards.

Egypt has seen a series of attacks mainly targeting security forces since the ouster of former President Mohammed Morsi last July. The Foreign Ministry claims over 200 police have been killed in the attacks since bloody security disperse and clampdown of “mass sit-in” by Morsi’ supporters last August.

AP reported that last Wednesday, four small explosions went off in subway stations and outside a court building in Cairo, wounding three people and marking the first attacks since the election and swearing-in of President Abdel-Fattah al-Sisi, the former army chief who orchestrated last year’s collapse of Morsi’s government.