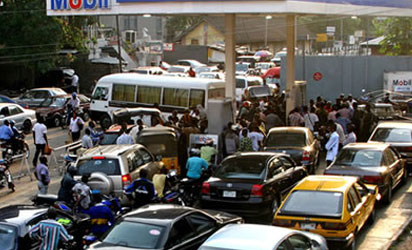 Our Correspondent who went round parts of the state on monday to monitor the situation, observed that a litre of the premium Motor spirit PMS, is now between  120 to 150 naira in some of the very few independent stations where the product is available.

Further investigations by AFRICAN EXAMINER reveals that most of the private Shylock marketers in the area are now capitalising on the development to short change desperate motorists, especially commercial drivers,  through metre adjustment.

It was equally observed that none of the major marketers, such as Mobil, Forte, Total and Coin Oil, have sold PSM in the last one month in Enugu.

Meanwhile, the ugly situation has continued to make life unbearable for residents of the coal city state.

The development, has forced most   private motorists, especially civil servants, to park their vehicles at home and resort to trekking and use of commercial buses to work.

A manager in an independent fuel stations along Agbani road, Enugu, who craved anonymity, told our Correspondent that “my brother, it is not our fault we sell products according to how we purchase from Port Harcourt and Lagos refineries.”

“But I think this issue of incessant fuel scarcity in Enugu state, and south east region in general, will continue to re-occur until the abandoned Enugu depot of the Nigerian National Petroleum Cooperation, NNPC is fixed and becomes functional” he stated.