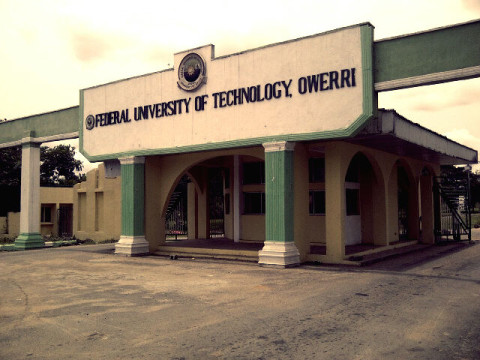 (AFRICAN EXAMINER) – The Federal University of Technology (FUTO) Owerri, Imo state, South- East Nigeria, has been shut down indefinitely by the school authorities, following a violent protest by the students which led to wanton destruction of the institution’s properties.
AFRICAN EXAMINER Correspondent reported that the students protest which started like a peaceful exercise, weekend, latter turned awry as the rampaging undergraduates went berserk, vandalizing properties of the school.

The students who were carrying out a peaceful procession over an alleged increment in their tuition fee by the school management, later turned violent after Policemen drafted to university to forestall breakdown of law and order, fired teargas at them.

Our Correspondent gathered thereafter, the police teargas, the students who immediately ran away but later came back and regroup.

A Source who craved anonymity, said immediately the students came back for the second time, they broke into the university’s ICT Centre and carted away the computers and other electronic equipment valued several millions of naira.

They equally vandalized facilities at various faculties, but security operatives prevented them from gaining access to the administrative block, which houses the office of the Vice Chancellor, (VC) as well as other top principal officers of the institution.

Meanwhile, some of the protesting students who spoke to newsmen alleged that “the management has been extorting the students for a long time, especially in the sale of textbooks and handouts, which are made mandatory for all students”.

“But what caused the protest was the recent increment of the schools by additional N13,000.00 which they termed as fee for IT Wireless Access”.

“It was supposed to be a peaceful protest and it started peacefully until the Policemen came and started firing teargas at us, while some where firing into the air” one of the students claimed.

It was at that point that the students were provoked and vandalized some of the buildings”.

Also speaking to journalists, a security man attached to the university who did not want to be quoted and was on duty during the incident, said, “I came to work around 9am and saw a large number of students chanting and shouting and when I asked what was happening, my HOD said that they were protesting the increment of school fees.

“And we were observing them to make sure that they did not destroy school properties until the Police arrived and started shooting teargas.

“It was at that point that the students went wild and started damaging anything at sight.

“The worst was the ICT Centre which they completely looted and vandalized”.

Efforts to get reaction of the school authorities hit the rock as office of the public Relations officer, PRO and that of the VC, were under lock and key.

But a senior staff of the university who did not want to be quoted debunked the alleged tuition fee increment, denying there was no such plan by the institution.

He said: “the students were misinformed by some miscreants who sent out misleading report about plan by the University Management to hike the fee, but the truth is that there is nothing like that” .the staff maintained.