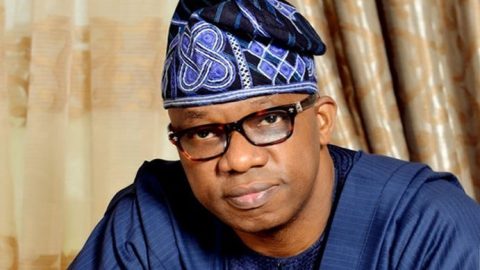 (AFRICAN EXAMINER) – Gov. Dapo Abiodun of Ogun on Tuesday banned fuel tankers and other articulated vehicles from plying flyover bridges in the state.

Abiodun announced this decision during his assessment visit to the scene of tanker explosion, which occurred on Monday in Abeokuta, claiming three lives with many others injured.

The News Agency of Nigeria (NAN) reports that five vehicles and two motorcycles were burnt in the incident that happened around IBB Boulevards in Abeokuta on Tuesday morning.

The governor also vowed that stiffer punishment would be meted out to any tanker driver found culpable.

According to him, the ban is meant to safeguard lives and property of the citizens in view of recent explosions in different parts of the state.

The governor, however, confirmed death of three persons in the Tuesday’s tanker explosion, while six others sustained varying degrees of injuries.

He said the injured, who were badly burnt, had been taken to the Federal Medical Centre (FMC), Idi-Aba, and the state Hospital, Ijaye, both in Abeokuta.

“We have gone a step further by inviting burn specialists from Lagos to attend to those that have 80 to 90 per cent burnt which requires special attention.

“The specialists have since arrived Abeokuta. They will make a determination whether we are to transfer those with burns to burn centre in Lagos.

“I will discuss with the state Ministry of Transportation, we will begin the enforcement of ensuring that tankers plying our roads are well checked to see if they are road worthy or not.

“We will put measures in place to reduce this kind of occurrence, part of that is to include that taker drivers should not operate on our overhead bridges anymore.

“If their ability to control their vehicles a times now become a hazard to other road users, we think it is important to declare that tankers are not allowed on our overhead bridges anymore.

“We will put in place a very tick fine for any tanker driver found on any of these bridges.

“This, among other measures will be rolled out in the next one day or two days,” the declared.