Group to Engage Enugu Stakeholders In Implementation Of Criminal Justice 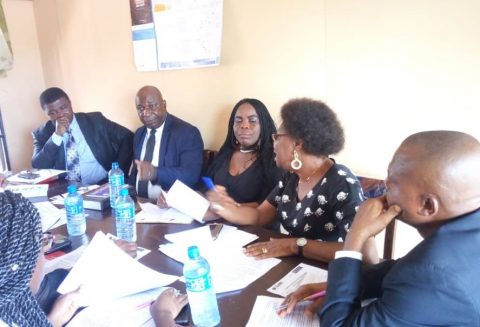 (AFRICAN EXAMINER) – The Enugu State Working Group on the project, promoting accountability and transparency in the administration of Criminal Justice System in Nigeria, is to engage key stakeholders in the implementation of administration of criminal justice Act ACJA, 2015 and administration of justice criminal law ACJL 2017 of Enugu state.

It listed some of the key actors they will interface with to include the state Attorney General and Commissioner for Justice, the police hierarchy in the state, justice sector reform team among others.

According to the group, the proposed interaction with the stakeholders will focus on the compliance to implementation of both the act and the law in order to identify the gaps and challenges associated with them  with a view to dealing with them head long.

The working group, made up of the independent Corrupt practices and other Related offences Commission ICPC, the Economic and Financial crimes Commission EFCC, Nigeria Bar Association NBA, National Youths Service Corp NYSC, FIDA, amongst others,  however, expressed its commitment towards supporting the implementation of the act and law in the state.

This was one of their resolutions during its first bi-monthly meeting held on Wednesday,19th June 2019 at the conference room of  Women Information Network (WINET), an Enugu based non-governmental organization NGO.

Sharing his experience on the implementation of ACJA 2015 and Enugu State ACJL 2017, the Economic and Financial Crimes Commission, EFCC Enugu Zonal Office representative in the group, Barrister Innocent Mbachie said that the organization is using the plea bargain provision in the ACJL and Act in speeding up trial in some of the cases as well as decongesting their cells.

Executive Director of WINET, Mrs. Miriam Menkiti who facilitated the meeting said that the project is supported by CLEEN Foundation and MacArthur Foundation.

She assured that ACJA 2015 and Enugu State ACJL 2017 working group was determined to ensure proper implementation of the Act and Law through the promotion of accountability and transparency in the judicial system.

In his remark, the ICPC south East Zonal head, Mr. Amedu Sule, noted that both the law and the Act are very crucial as they have provisions for speedy trial of criminal cases and enhancement of the judicial process in the Nigeria.

He regretted that some of the provisions were not being implemented in a manner that could lead to the realization of the desired ends, stating “for instance, the act and the law prohibit arrest in lieu of a suspect, but the practice appears to be persisting due to lack of monitoring” .

Meanwhile, some of the participants had identified other challenges facing ACJA and ACJL realization  to include lack of vehicles to convey suspects to courts, bribery and corruption within the prison system, the police,  judiciary, among others.

Our Correspondent who covered the event reports that the  meeting was  attended by representative of EFCC, ICPC, NYSC, FIDA, Legal Aid Council and AFRILAW among others.