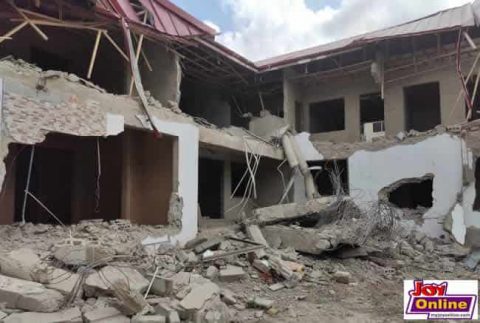 (AFRICAN EXAMINER) – Unknown gunmen entered the Nigerian high commission in Accra, Ghana on Friday and destroyed some apartments that were under construction.

Reports say the affected buildings were constructed to house staff and visitors of the commission but a Ghanaian businessman had complained that the commission trespassed as the building encroached his land.

It was also reported that the businessman had also visited the place with evidence to show that he is the rightful owner of the land and he returned on Friday accompanied by armed men who executed the demolition.

Officials stated that efforts were made to contact the police, but nothing was done by the Ghanaian authorities to stop the demolition.

African Examiner reports that as at the time of filing this story, Ghanaian authorities are yet to react to the incident.

It  will be recalled that it has been rumored that both countries are enmeshed in diplomatic row previously as the Ministry of foreign affairs in Ghana had denied reports that the Nigerian commission in Ghana had been evicted in Accra because of speculations that suggested so.

Meanwhile, Nigerian Government has condemned the two attacks on its residential buildings in Accra, describing them as criminal and outrageous, demanding urgent action from the Ghanaian authorities.

Minister of Foreign Affairs, Geoffrey Onyeama made this known via his verified twitter handle @GeoffreyOnyeama on Sunday.

He said that the federal government was already engaging with the Ghanaian authorities to urgently bring the perpetrators to book and protect the lives of Nigerians in Ghana.

“We strongly condemn two outrageous criminal attacks in Accra, #Ghana, on a residential building in our diplomatic premises by unknown persons in which a bulldozer was used to demolish the building.

“We are engaging with the Ghanaian government and we demand urgent action to find the perpetuators and provide adequate protection for Nigerians and their properties in Ghana,” he twitted.