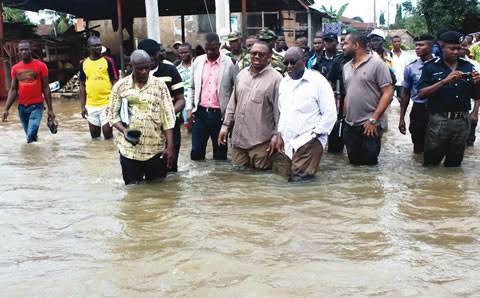 (AFRICAN EXAMINER) – Residents of Nkisi Aroli street of the commercial city of Onitsha, Anambra state, South- East Nigeria, was on Wednesday thrown into apprehension following the collapse of a 3 -storey building and prisons rear fence in the area.

The building located at No 22 of the said street belong to one Mr. Chukwuma Njeka, and was  reportedly collapsed due to a heavy downpour that lasted for several hours.

African Examiner gathered that although, there was no casualty, but the rain which equally brought down the rear fence of the Onitsha prison wrecked havoc in parts of the city, even as properties worth several millions of naira were damaged in the collapsed building.

The Anambra state  Police police public Relations officer PPRO, Haruna Mohammed,  who confirmed the incidents to newsmen said the scene was immediately cordoned off by the Police to prevent looters from taking advantage of the disaster, while the debris were also being cleared.

He disclosed that state Commissioner of Police, John Abang had ordered for immediate deployment of Police personnel to secure the scene and environs.

Our Correspondent reports that building collapse has  been a recurring decimal in Onitsha city, as no fewer than five of such incidences had happened this year in the area.