I Quit PDP, But Yet to Join APC , Says Chime 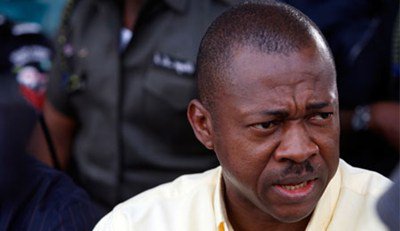 (African Examiner) – Contrary to reports in both the conventional and social media that immediate past governor of Enugu state, Sullivan Chime has dumped the crisis- ridden peoples Democratic party, PDP for the ruling All progressives Congress, APC, state chairman of the party Dr. Ben Nwoye has, refuted the reports, saying the former governor has not join its fold.

Addressing newsmen in his office at the APC secretariat in Enugu Friday evening on the reports, Nwoye, said if there was such a development, as the chairman he would be the most competent authority to announce it.

The APC chairman, explained that even though the party’s doors are wide open for all true democrats and progressives in the state, there are procedures and laid down processes of becoming a member.

According to him, the registration of new members are done at the political ward level, adding that “Sullivan Chime is not yet a member of APC‎.

The Enugu state chapter of APC is not yet aware of his joining the party” the chairman declared.

“What is obtained is that the state presents new party members to the world and not the zonal structure of the party as was reported.

“For instance, when I receive Chime‎, I will submit him to the South east zonal structure, We don’t work from up to down, we work from down to up.”

Besides, Nwoye said the party does not announce the joining of new members on the social media platforms, rather, “we invite journalists both the print and electronic to come and cover such exercise.

Nwoye said: “I want to use this medium to ask members of the public and the media to disregard the face book information which was far from the truth.

The news of chime’s defection arose from the South east publicity secretary ‎of APC, Hyacinth Ngwu who had on Thursday in his facebook page announced that the ex-governor has joined the ruling party.

However, Chime has since said that he is not yet a member of APC, though, confirmed that he has left the PDP.

In an  interview with the News Agency of Nigeria, NAN, on Friday in Enugu, the former Governor explained that his decision to quit the PDP was because the party was “no longer in existence in the true sense of it’’.

He added that he was yet to join another political party, contrary to speculation making the rounds that he had decamped to the APC.

The former Governor said  he was still making consultations to determine the political party to pitch tent with, pointing out that his decision to dump PDP had nothing to do with his pending corruption case with the nation’s anti graft agency, Economic and financial crimes commission, EFCC.

His words:“The PDP, we used to be members of is dead. The party I joined in 1999 and had the opportunity of leading in the state for eight years is no longer in existence.

“We have two groups claiming to be in charge of the party as chairman. These two, none of them can actually lay claim to the chairmanship of the party.

“There is no provision in PDP’s Constitution for interim caretaker committee led by Sen. Ahmed Maikarfi.

“The PDP convention has no power to set up a caretaker committee and did not seek to amend the party’s constitution,” he stated.

The former governor explained that Sen. Ali Modu Sheriff on his own was brought in to serve out the tenure of former PDP National Chairman, Adamu Mu’azu, adding that the tenure had long elapsed.

Chime said that remaining in the PDP would be a deceit, advising his supporters to look for a better platform to actualise their political aspirations.

He said that he could not explain why INEC had not deregistered the PDP.

“It is surprising or maybe INEC has not deregistered the PDP because the organisation is no longer working in tandem with the constitution that created it.

“The PDP as originally formed has been cremated and no serious-minded politician will remain in it.

“If those still remaining feel strongly about coming together they can come back, secure de-registration of the party and then form another party.”