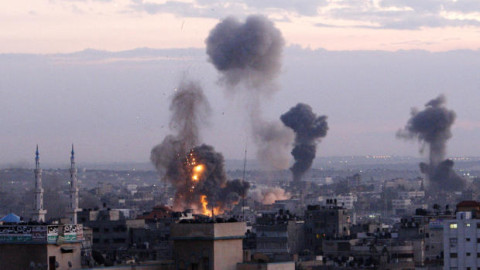 The Israeli-Palestinian mayhem rages as nine Palestinians have been murdered in an Israeli air raids on Gaza following rocket attacks on Israel.

Hamas confirmed that six members of its military wing died in a strike near Rafah, in the south, adding that three others died in separate air strikes in response to rocket and mortar fire on Israel.

The unfolding tension in the region is the fallout of a Palestinian teenager Mohammed Abu Khdair’s killing last week.

On Sunday, police said they had arrested six Jewish suspects in connection with the homicide, which the Police told the BBC was due to Abu khdair’s “nationality”.

Coincidentally, Abu Khdair’s killing followed the murder of three Israeli teenagers in the occupied West Bank, whose bodies were found a week ago.

Israel has allaeged two members of Hamas abducted and killed the youths, but it has denied any involvement.

In the main time, Hamas’ has reportedly threatened “the enemy will pay a tremendous price.”