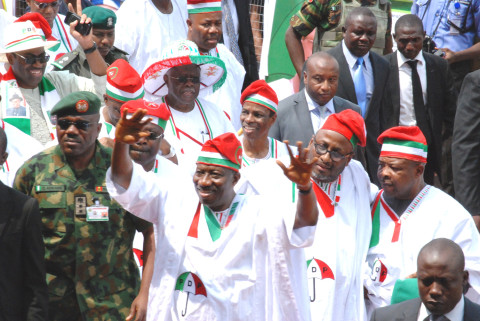 The President besides canvasing support for the party at the rally also solicited vote for Omisore while on a courtesy visit to the Ooni of Ife, Oba Okunade Sijuwade in his palace.

Jonathan extolled PDP’s candidate and affirmed that he was the right choice and only candidate competent enough to compete effectively with the incumbent Governor Rauf Aregbesola.

He therefore urged the monarch to vote the ex-Senator during next Saturday poll.

Oba Sijuwade in his response told President Jonathan that the unity of the country was important, stressing that in it, lied the country peaceful co– existence and development.

On insurgency, the monarch appealed to other traditional rulers in the country to support Federal government’s efforts and initiatives to stem the attacks on innocent citizens and invasion of communities across the country.

He added that the South Western part of the country needed Federal presence to benefit from Jonathan’s transformation agenda and programmes.