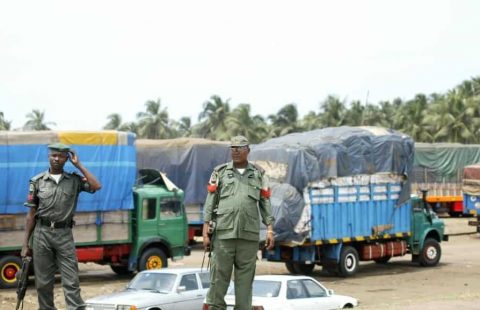 The ecstatic residents of the border town celebrated with their motorcycles, vehicles, blowing of horns, and pouring of water on each other to celebrate the announcement.

President Buhari had on Wednesday directed that the nation’s land borders should be opened immediately after the weekly federal executive meeting.

The presidency further disclosed in a tweet the list of the borders to reopen for business: “President Buhari has directed the immediate opening of four land borders: Seme, Illela, Maigatari, and Mfun.”

African Examiner reports that Nigeria had closed its land borders since August 2019 as government claimed that the closure was to reduce illegal importation of drugs, small arms and agricultural products from neighbouring West African nations.

Meanwhile, a large number of stakeholders and residents of Seme border community have expressed their joy at the development and commended President Muhammadu Buhari for reopening the land borders.

Alhaji Bisiriyu Fanu, ANCLA Seme Chapter Chairman, said that the reopening of the land borders was overdue, saying that the gesture will boost trans- border trade in the ECOWAS subregion.

Fanu said that many freight forwarders had lost their means of livelihoods as a result of the closure because their goods were stuck on both sides of the border.

The Onimeke of Imekeland, Oba Abraham Ogabi, also said that the reopening of the land border was a welcome development.

Ogabi said that the closure had paralysed socioeconomic activities of border communities which relied on the trade between Republic of Benin and Badagry communities.

“We are in the border area, some of our people are married to their women and we do legitimate business with them.

“But the closure has affected our socioeconomic relationship with the border communities of Benin Republic.

“We thank the President and members of the FEC for reopening of the land borders,” he said.