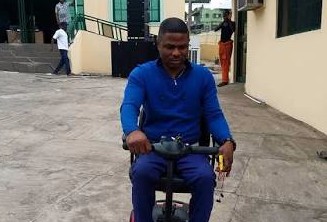 A member of engineering crew of the popular juju exponent, Yinka Ayefele died, while others sustained injuries Saturday, in a fatal auto crash, on Lagos-Ibadan expressway.

The deceased identified as Tunde Oduneye, was said to be traveling in one of the trucks with musical equipment with his colleagues and died when the lorry ran into a big pot hole, swerved off the road and finally plunged into a deep ditch by the highway.

He was subsequently rushed to the University College Hospital (UCH) Ibadan, but confirmed dead around 11pm, the same day.

Ayefele image maker, David Ajiboye, in a statement Sunday, disclosed that the Ibadan based juju star, who also involved in an auto crash some years back, had been booked for a wedding function – of the daughter of Mr. Olu Amore, a Commissioner of Police, when the sad incident occurred, after the old toll plaza in Ogere.

Ayefele has since visited the UCH Accident and Emergency Ward where other injured band members were being hospitalized and receiving treatment.

Ajiboye stated that the Late Oduneye, survived by a wife and a two-year old baby, has been buried Sunday, in his Ijebu Igbo, Ogun State home town, south West Nigeria.