By Ayo Balogun, Lagos – The hatred and bitterness Governor Babatunde Fashola has for the All Progressive Congress (APC) Governorship candidate, Akinwunmi Ambode appears to be over as the governor has begun campaign for Ambode’s emergence as governor next year.

Ambode resigned from Fashola’s government in 2012 as the Accountant General after he fell apart with the governor and the governor would have sacked him, but was asked to resign honourably which he did. 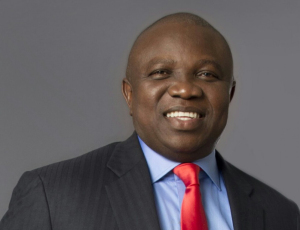 Ambode fell apart with Fashola based on accounting principles as he refused to compromise his integrity and had to part way with the governor. Fashola had vowed that he would never support Ambode’s ambition.

However, that seems to have ended now after Ambode emerged candidate of the APC in Lagos, with Fashola’s candidate, Supo Shasore soundly defeated and humiliated after the governor has spent over N100 million to push his candidate through but failed.

At two different fora on Saturday, Fashola urged Lagosians to vote for the APC’s governorship candidate, Ambode, in order to sustain the programmes of the present administration.

Speaking at the Lagos Sea Food Festival 2014 at the Bar Beach, Victoria Island, Governor Fashola said supporting the new candidate and the party would also ensure that the State would continue to enjoy the good governance and high performance attributes of the Party which have been variously demonstrated in all the States under its control.

Noting that the 2014 Annual Seafood Festival would mark his last as Governor of the State, the Governor declared, “I urge you all to support the new APC Governorship   Candidate; support him, support the Party and make sure that the Festival continues.”

He told the scores of fishermen and women as well as other related stakeholders at the well attended event, “If you want this to continue, you have a role to play; you have to register and you have to collect your Permanent Voters’ Card and then you can use your vote to choose what you want”.

Also speaking in the same vein earlier in the day at the 10 Degree Event Centre, Oregun, venue of the fifth edition of the Youth Stakeholders’ Forum organized by the State’s IGNITE Enterprise Partnership Project in conjunction with the After School Graduate Development Centre (AGDC), Governor Fashola, who reiterated that all the programmes were initiated by an APC government in the State, said the people must do the right thing during the next election in order to sustain them.

“This intervention and several others that have uplifted the lives of the vast unemployed graduates and other youths have been made possible with the usage of the taxpayers’ money by the ruling party in the State – the All Progressives Congress. So if you want a continuation, you know what steps to take during the next election”, the Governor said.