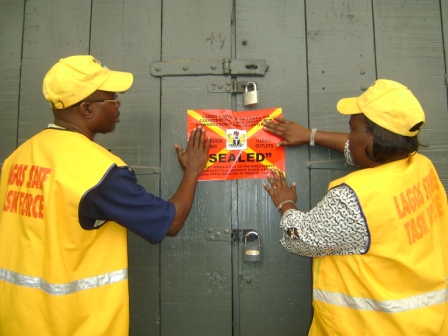 Men and officials of the Lagos State Task Force on Counterfeit, Fake Drugs and Unwholesome Processed Foods has sealed no fewer than 40 illegal drugs stores at Alapere, Magodo and Ikosi-Isheri areas of Lagos, Nigeria.

The raid was conducted in conjunction with the Pharmaceutical Society of Nigeria (PSN), Federal Taskforce, National Agency for Foods, Drugs Administration and Control (NAFDAC), Pharmaceutical Inspectors Committee (PIC), and Officers and men of the Nigerian Police Force from the state command.

Special Adviser to the Governor on Public Health, Dr Yewande Adeshina who disclosed this at the weekend explained that government’s resolve to streamline the activities of operators in the drug sector was borne out of its zeal to stop the inherent dangers associated with the peddling of fake, substandard and expired drugs by unauthorized and unregistered drug and pharmaceutical outlets.

“In furtherance of the state government’s commitment to ridding the state of the menace of illegal drug store operators in the state, we cannot fold our arms and do nothing in respect of the excesses of these illegal drug store operators. That is why we will not relent in our drive to sanitize the drug distribution system in Lagos, hence the mandate of the Task Force on Counterfeit, Fake Drugs and Unwholesome Processed Foods”.

The Special Adviser wondered why the people still chose to stay on the wrong side of the law adding that the provisions of the law as stipulated by the Pharmacists Council of Nigeria Act of 1992 and the Registration of Pharmaceutical Premises Regulation Law of 2005 outlines the requirements for the registration and renewal of pharmaceutical premises, culpability and punishment for offenders.

“The provision of the pharmaceutical laws stipulates that pharmaceutical premises cannot be located in motor parks and environment where commercial activities take place like market places, kiosks, road-side stores and containers and the law also frowns at pharmaceutical stores standing and growing very close together,”Adeshina noted.

Adeshina noted that the affected shops were sealed off for offences ranging from sales of drugs without license from the regulatory authority; failure to relocate from a market area and adherence to the mandated distance between a patent medicine shop and market place as stipulated by the law; and sales of counterfeit and fake drugs amongst others.

The Special Adviser advised anybody interested in selling medicine to liaise with the Pharmaceutical Inspectorate Unit of the Ministry of Health, the legitimate authorizing body for Patent and Proprietary Medicine Vendors License (PPMVL), located on the ground floor of Block 8, Old Secretariat, in Ikeja, just as she urged those interested in importation, distribution and sales of drugs to get their premises licensed by the appropriate authority, the Pharmacist Council of Nigeria (PCN).