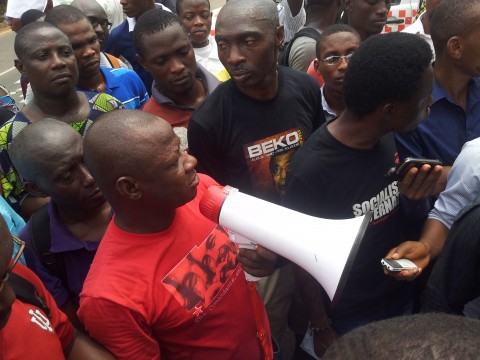 Students of the Lagos State University (LASU) on Tuesday booed the Deputy Speaker, Lagos State House of Assembly, Honourable Musibau Kolawole Taiwo, in an attempt to address hundreds of the aggrieved students. 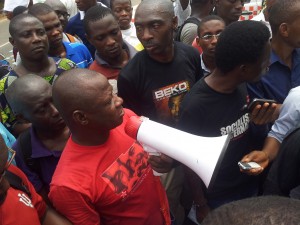 The students stormed the State House of Assembly during a joint protest with Joint Action Front (JAF) and Education Right Campaign (ERC) on Tuesday, February 18, 2014, over hike in tuition fee and partial resumption of students.

Stating the demands of the students, Publicity Secretary of ERC, Hassan Soweto, described the sudden hike of the school fee from N25, 000 to N250, 000 as outrageous.

Soweto said, “We want members of the House to talk to the Governor to reduce the high fees being charged by the school, and allow all LASU students to resume on 24th of February announced by the school management as resumption date for final year students.”

Other demands of the students include re-opening of LASU portal, adequate funding of the institution amongst others.

While the students were chanting protest songs with placards at the entrance of the Assembly, JAF Secretary, Comrade Abiodun Aremu, added that all the students would resume on 24th of February with the final year students.

Aremu warned the House to avert the looming crisis by reversing the fees charged by the institution, saying that JAF members would be at the gate of the school on the resumption day and that they would disregard law enforcement officers, the school management might invite to harass the students.

Reacting to the demands of the students, Lagos State Deputy Speaker, Hon. Musibau Kolawole Taiwo, said it became imperative for the fee of the school to be increased, when the facilities on ground there were not enough.

According to him, some courses had been deaccredited in LASU by the National Universities Commission (NUC) during a visit to the school.

“I was part of the lawmakers that went to NUC office in Abuja and we were told that they were even coming to dis-accredit more courses. That was why we supported the state government on the need to increase fees to help the school,” he said.

Kolawole however, said amidst protest by the students promised that the House of Assembly would look into the letter of protest submitted by the students.