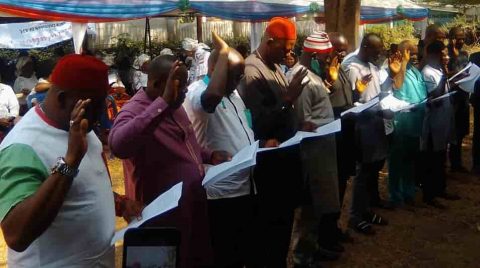 (AFRICAN EXAMINER) – The Enugu state Chapter of the All Progressives Congress, has announced the expulsion of one Deacon Okey Ogbodo and 4 other loyalists of the Minister of Foreign Affairs, Mr. Geophery Onyeama from the party.

The action according to the party, followed their refusal to withdraw lawsuits filed against the party as earlier directed by the National leadership.

It would be recalled that Dr. Nwoye was recently returned as the Caretaker Committee Chairman of the party in Enugu State by the National Executive Committee NEC in Abuja.

He, however, stated that the expulsion of the Onyeama’s men would serve as a deterrent to other APC members who are always engaging in activities capable of bringing the party down.

According to him, “the state chapter of the APC acting on the directive of the National Legal Adviser of the party set up a disciplinary committee to commence and complete the process of investigating members found wanting.

“Deacon Okey Ogbodo and his cohorts which include; Barr. Chike Omeje, Rufus Nwagu, Rev. Onuorah, Ndubuisi Ani and Chinedu Okosisi in flagrant disregard to the resolution of the NEC failed to withdraw their cases at the appellate Court.

“The committee led by Chief Anike Nwoga after their investigation, recommended the expulsion of these members that failed to respect the decision of the party and this has been communicated to the National Legal Adviser of the party.

Dr. Nwoye warned the caretaker committee Chairmen across the 17 Council areas of the state who were also sworn in to ensure that those expelled from the party are not registered in their respective political wards when the party commenced its membership registration in 2021.

He warned that any ward Chairman that disobeys the party’s directive and go ahead to register the expelled former members would also be shown the exit door.

The Chairman said that the action of the party shows that they are a serious party and that the plan of some “coupists” failed, stressing that APC in the state will continue to make discipline its watch word.

“This indicates to you that this is a serious party. Those that engaged in a bloodless coup in an attempt to change the leadership of the party have failed.

Our Correspondent reports that after the swearing in of the state Exco Members as well as zonal, and local government leaders, the state Caretaker Committee legal Adviser, Barrister Ben Nebe, and state  Secretary of Buhari Support organization  BSO, Barrister Onwusi administered oath office and allegiance on them.

The event was graced by top  chieftains of the party in the state.