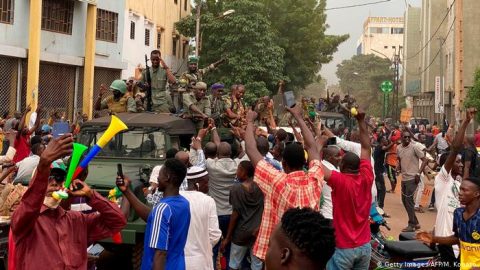 (AFRICAN EXAMINER) – Malians welcome the recent military coup and hope that the power will finally be handed down to a civilian government, a member of workers’ trade union, Diawara Zainab Sidibe, told Sputnik.

“The hardest times are yet to come … For us, this is a start, a good start, and we welcome it. We hope that the military is telling the truth and will comply with its obligation to transfer power to civilians.” Sidibe said.

An activist of the opposition June 5 Movement – Rally of Patriotic Forces (M5-RFP), Imam Oumarou Diarra, believes that the Economic Community of West African States’ sanctions will not have a significant impact on the country.

According to him, the seven-year presidency of ousted Ibrahim Boubacar Keita became the greatest threat to the country and everything that will happen after would be good for Malians.

A group of Malian soldiers initiated an uprising on Tuesday at a military base not far from the capital.

The mutineers said they had detained President Keita and Prime Minister Boubou Cisse, as well as other high-ranking officials.

Keita subsequently announced that he and his cabinet were stepping down and dissolved the parliament.

Later, the rebel military leaders set up the National Committee for the Salvation of the People, closed borders and imposed a curfew.

They call for a political transition that will lead to a general election.

The M5-RFP movement, which led months-long anti-government protests that preceded the coup, has promised to cooperate with the military in organising the transition period.