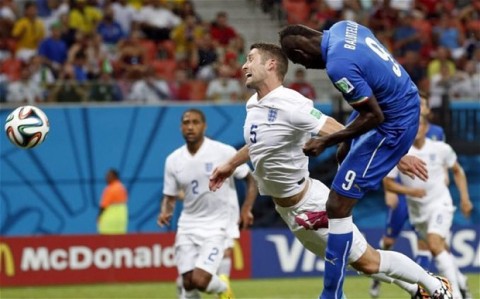 Mario Balotelli’s headed goal early in the second half gave Italy a crucial 2-1 win over fellow European heavyweights England in their Group D opener in Manaus.

Continuing the pattern of a free-scoring World Cup, both sides created a flurry of chances in an open and attacking match despite the stifling heat and humidity of the Amazon jungle and a pitch of questionable quality.

England, inspired by 19-year-old Raheem Sterling, made a confident start to Saturday’s game with the Liverpool winger going close with an early snap shot.

But it was the Italians who went ahead as Andrea Pirlo’s dummy from a corner left Claudio Marchisio the chance to score with a rasping 35th-minute drive from outside the area.

Within two minutes England drew deservedly level as Daniel Sturridge converted from strike partner Wayne Rooney’s cross after the Manchester United star had been sent clear down the left by Sterling.

The eventual winner came five minutes after the break as the excellent Antonio Candreva was allowed to cross for Balotelli to head home at the far post from close range.

England pressed forward and created a number of half chances, the best of which fell to Rooney, who dragged his effort wide.

But Italy, which knocked England out of the 2012 European Championship in a quarterfinal penalty shootout, always carried a threat as well — and veteran playmaker Pirlo rattled Joe Hart’s crossbar with an injury-time free kick.

Italy coach Prandelli praised his midfielders for their role in a famous victory.

“I am clearly satisfied with this victory as this match against England was very difficult, they are a very good team,” Prandelli said. “We had a very good basis in midfield,” he added.

The win leaves Italy well placed to reach the last 16 after Costa Rica stunned South American champion Uruguay 3-1 in the earlier match in the group.

Uruguay, which kept recovering star player Luis Suarez on the bench in Fortaleza, ended the Group D opener with 10 men when Maxi Pereira was sent off for an ugly challenge in injury time.

Uruguay had looked set for a routine victory when Edinson Cavani fired in a 24th-minute penalty after Diego Lugano was hauled down.

But there was a complete reversal of fortunes after halftime as Joel Campbell drove home a spectacular 54th-minute equalizer.

Liverpool’s Suarez, who had knee surgery ahead of the tournament, was still not risked by coach Oscar Tabarez despite the dire plight of his team and a sorry night was to get worse.

Campbell, on the books of Arsenal but yet to play a first team game for the English Premier League side, capped a fine performance by sending away substitute Marco Urena to score a late and clinching third.

Pereira then saw red in a moment of madness as he lunged at Campbell and will miss Uruguay’s second group match against England Thursday, which now takes on added importance for both teams after their opening setbacks.

“He’s a man who unsettles you, he surprises, changes the tempo, he was uncontainable for the Uruguay defense,” said Pinto.

In Saturday’s first match, Colombia scored the fastest goal of the World Cup to date to set up a 3-0 victory against Greece in the opening game of Group C.