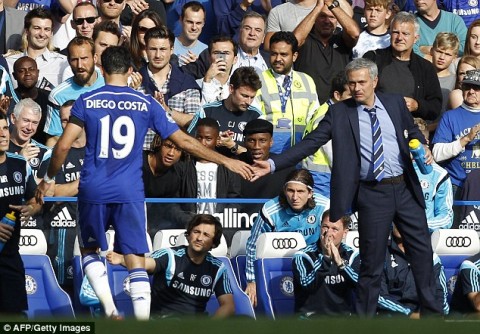 Jose Mourinho believes that Diego Costa is ‘not normal’, as the striker’s blistering introduction to English football showed no sign of abating with a hat-trick against Swansea.

The 25-year-old was superb on Saturday as the Blues dealt with an early scare from Garry Monk’s impressive side to hold on to their impeccable Premier League record. 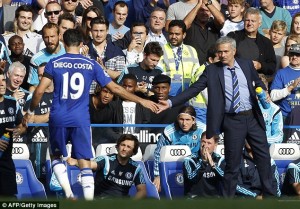 It means that Costa now has a remarkable seven goals in four league games since his £32million move from Atletico Madrid in the summer and further enhances the belief that Chelsea came out of the transfer window as clear victors.

Manager Jose Mourinho is incredibly pleased with the impact of his signing since he joined the Blues, and Costa now has more league goals than Fernando Torres managed in the entire of last term.

‘If the team plays well he has to score goals. Seven in four is maybe too much,’ the manager said after the 4-2 win. ‘It is something that is not normal. We cannot expect that after eight matches he will have 14 goals.

‘He is comfortable in the team. The team was built in a way that we were waiting for a certain type of striker and I think now everybody knows that Chelsea did the right thing in waiting for him and not going into the market in the summer of 2013 or January.

‘We waited for the right one.’

Sitting top of the Premier League, the picture looks rosy for Chelsea, who saw both Manchester City and Arsenal drop points earlier in the day. They are already five points clear of last season’s champions although Mourinho is wary of tricky fixtures straight after European ties in the coming months.

‘We have fixtures that are like a poisoned gift for us, because every time we play in the Champions League the next match is against Man City, Arsenal, Man United or Liverpool. We have difficult weeks ahead of us.’

Wednesday’s home Champions League game against Schalke kicks Chelsea off in continental competition, with Mourinho insistent Group G is as tough as they come. Chelsea will also come up against Sporting Lisbon and Maribor and hope Didier Drogba will be fit for the opener.

‘The group is more difficult than people think,’ he added. ‘The Portuguese league is not strong, but the top three teams are very good. You go to Chelsea’s history and see when we played against Besiktas it was difficult and against Porto.

‘When we play Sporting it will be difficult. The Germans are Germans – Schalke have improved a lot on last season.’