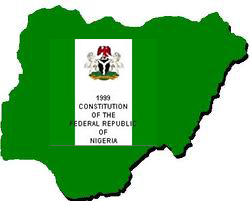 Leaders in Igbo land, under the auspices of ‘Concerned Igbo Leaders of Thought’ led by Lagos based constitutional lawyer, Professor. Ben Nwabueze, have vowed to push for the emergence of a brand new constitution from the proposed national conference.

After their meeting on Monday in Enugu, the leaders, also advocated that  the new constitution such come into law through a referendum, saying it should not be subjected to National Assembly approval.

Former Director General of National Orientation Agency (NOA), and secretary of the group Prof. Elochukwu Amucheazi, who briefed newsmen on the outcome of the meeting, hinted that the Igbos  was in total support of conference of ethnic nationalities where members would be nominated from their groups.

According to him, “The (Presidential Advisory Committee) PAC, seems to be thinking of the amendment of the constitution and we met to see how to inform the president that this is not in order because we are thinking of an entirely new constitution.

“What we are saying is that we must have a way of informing the president and Nigerians that the recommendation is not in order and in trying to do this, the meeting of “Concerned Igbo Leaders of Thought” and Ohanaeze Ndigbo are resolute that this will not help the country.

“We want this country to survive and we are doing all in our power to make it survive”. The former NOA stated

He further said that nomination into the conference should not be based on existing geo political zones or senatorial zones, but rather, should be on different ethnic nationalities that make up the country.

Amucheazi, therefore, stressed that it would be a denial on certain ethnic groups if representation was made on the basis of senatorial zones.

“Again, it is not delegates through adult suffrage by individuals on their own merit but that the ethnic nationalities will have a way of nominating people to it. So we are dealing with nationalities and this is an issue that seem to be misunderstood”,

The political scientist, stated that the position of the Igbo race on the dialogue would be made known by the end of January, adding that: “We are working out content of the constitution and when we are through with it, we are going to invite all Igbo groups to have a say at it.