NGO Advocates Protection for Women And Girls with Disabilities 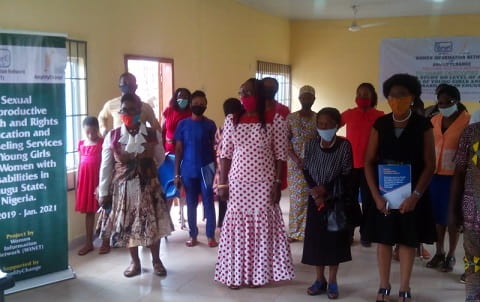 (AFRICAN EXAMINER) – An Enugu based non-governmental organization (NGO) ‘Women Information Network’ (WINET), has advocated government sanctions against those who infringe on the sexual Reproductive Health and Rights (SRHR) of vulnerable girls and women with disabilities in the state.

It noted that: “since the vulnerability of girls and women with disabilities occur both at home (by parents and relations ) and in the public spheres, government and policy makers should introduce sanctions to penalize infringement on the (SRHR) of people with disabilities PWDs, and ensure to monitor the implementation of such sanctions.

The submission was part of recommendations proffered in a base line study report on level of awareness of sexual reproductive health and rights as human rights of young girls and women with disabilities in Enugu state, South- East Nigeria, carried out by a consultant on behalf of WINET in March, 2019.

Presenting the outcome of the survey report before some selected (NGOs), civil society groups, the media and other stakeholders Thursday in Enugu, lead researcher for the study which was carried out in Enugu and Oji River, areas of the state, Professor  Mrs. Nkoli  Ezumah, also stressed the need for concerted efforts by government, women groups, NGOs, churches and the media, as well as community members to ensure that women and girls with disabilities attain the highest standard of sexual and reproductive health and rights in the society.

The report equally recommended that “concerted efforts also need to be put in place to empower girls and women with disabilities to acquire education and skills that will enable them be employable, or engage in independent activities ,which in turn mitigate their vulnerabilities to sexual abuses and inability to attain their sexual reproductive health rights.

“Ongoing advocacy actions being taken to stop the cultural practices that prevent women and girls with disabilities from attaining the highest standard of sexual and reproductive health and rights should be intensified at national, state and local government levels.

The retired Professor of Sociology from the University of Nigeria Nsukka (UNN) had explained that the objective of the survey carried out among the deaf, blind and other people with disabilities was to obtain baseline information on the level of awareness of young girls and women on  SRHR), which according to the report was low.

African Examiner reports that the report also revealed that majority of the survey respondents were not able to make a clear distinction between sex and gender.

Professor Ezumah, hinted that a mixed method comprising quantitative survey and qualitative methods were used for data collection, adding that the total number of the survey respondents were 100.

Executive Director of WINET, Mrs. Miriam Menkiti, had in her remark, disclosed that “in 2019, the organization started the implementation of a project titled: Sexual Reproductive health and Rights Education and counselling services for young girls and women with disabilities in Enugu state with support from AmplifyChange.

According to her, it is a two-year project that will end by next year, stressing that it is aimed at increasing individual awareness of (SRHR), as human rights for young girls and women with disabilities.

The WINET boss, added that the project is equally designed to empower them to claim their (SRHR), and become active in advocating for it.

Our Correspondents who was at the meeting, quoted some of the participants as calling on (WINET) to extend similar project to the men folk in future.