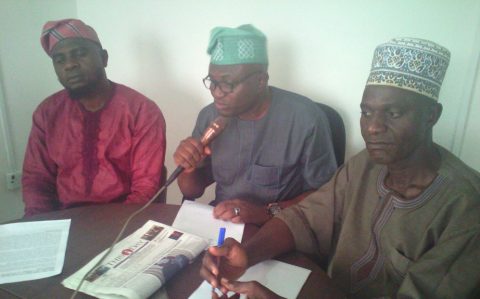 LAGOS, NIGERIA (AFRICAN EXAMINER) – Government at various levels have been prompted to increase patronage of ”made in Nigeria goods” in order to boost the consumption level of locally made products.

The trend, when truly imbibed, should made to reflect in ”official dress code, foods served at government functions, office equipment and decorations, official cars, oversea trips, contract awards” and other related activities of the government.

The National President of The Companion, an Association of Muslim men in Business and Professions, Alhaji Thabit ‘Wale Sonaike made the call on Saturday at a press briefing in Ikeja, Lagos State.

While affirming that the Nigerian industrial sector and professionals have the capacity and potentials to satisfy the local demand, Alhaji Sonaike specified that the patronage being canvassed must be continuous, while government should in addition, give incentives and various relieving concessions to the local industrialists.

Speaking on the recent human trafficking and slavery in Libya in which many Nigerians and other nationals were victims, the Companion National Leader declared that the act was ”condemnable and most unfortunate”.

Alhaji Sonaike therefore called on African leaders especially the sub-saharan African heads to show more concern for the upliftment of their citizens and the development of their economies.

”It is very sad to note that able bodied and young Nigerians who should stay back to contribute to the economic development of the country are being forced to flee in search of greener pastures.

”Government at all levels should pay more attention to infrastructural development which have multiplier effects on the economy. uninterrupted power supply, motorable roads, public health care high quality education, safe airports and seaports, favourable economic policies that will promote private investments are issues that should engage the leaders attention more than ever before. They have held Africa backward for too long” Alhaji Sonaike lamented.

While responding to questions on the ravaging act of terrorism, religion training and mentoring, the Companion head who noted that it was fundamental for every religion body and their membership to be vary in choosing the sources of their mentoring, asserted that more investment and scrutiny were required so to check the alarming trend of misleading the followers with the pretense of training to serve God.

The President indicated that it was due to this factor that The Companion as a body established an Academy for Ethics and Leadership, which according to him is meant for teaching and guiding of the group’s members, irrespective of their Islamic knowledge and the school of thought they embrace.

This, Alhaji Sonaike explained was aimed at moderating the mindset and relationship of members with the public.

On 2018 budget, the Companion commended the executive arm of government for the early presentation of the proposed document to the National Assembly NASS and called on Lawmakers to ensure that they do a thorough and quick scrutiny on the bill for it to be signed into law, latest by the end of 2017.

In achieving this, Alhaji Sonaike advised the NASS members to jettison going for any recess until after the conclusion of the budget debate, adding that this was key ”in order to walk the talk about change”.

In another development, the President observed that having being paid the earned allowance to lecturers in the public universities, and called on the lecturers to reciprocate the gesture by ensuring that academic activities run smoothly in the universities.

In addition, he urged the government to put in place a mechanism to avoid accumulated allowances, and expressed worry about the alleged non-payment to the University of Ilorin lecturers.

”This leaves a sour taste in the mouth as the university is the only public university in Nigeria that has stayed out of ASUU strike in the last eighteen years and therefore deserving the payment more than any other federal university in the country. The government should not only order the immediate payment of the university but should also investigate the circumstances that led to their exclusion in the list. Doing otherwise will be tantamount to an endorsement of strike action as the only language the government understands in order to get legitimate entitlements by its workers” Alhaji Sonaike asserted.

The Companion also condemned the declaration by the US President Donald Trump’s which recognized Jerusalem as the capital of Israel.

Alhaji Sonaike stated that the group stands in support of global opposition to the move.

The President therefore called on US citizens to revolt against President Trump’s attempt to truncate the existing fragile peace in that part of the Middle East.

”The significance and historical antecedent of Jerusalem is too widely known for anybody to make attempt to re-write or appropriate the city.   There is too much tension in the Middle East to start another controversy that may snowball into crisis in the region” Sonaike affirmed.

In addition to the protest, the Companion Leader called on the United Nations UN to condemn and reverse Mr. Trump’s declaration.

On the 2019 general elections, the Companion head admonished the government not to lose focus.

He noted this was important as the subtle campaign which has started could easily derail the system, if care is not taken. This, Alhaji Sonaike warned if happened, would further harm the economy which is gradually coming out of recession.

Meanwhile, the recently appointed National President announced that the Cross River State District of the group would soon be inaugurated. The present National EXCO of the organization was inaugurated on October 14, 2017. Its tenure will lapse in October, 2019.