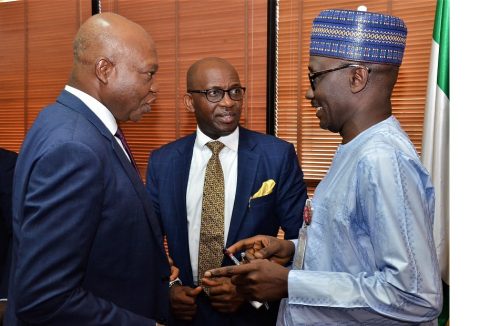 (AFRICAN EXAMINER) – A critical step towards the realization of the Train 7 Project of the Nigeria Liquefied Natural Gas (NLNG) was taken Friday in Abuja with the signing of a Gas Supply Agreement between the company and major gas producers.

Speaking on the significance of the execution of the Gas Supply Agreement, Group Managing Director of the Nigerian National Petroleum Corporation (NNPC), Mele Kyari, disclosed that with the agreement in place, all was set for the take-off of the project, stressing that the Final Investment Decision on the project would be taken next week.

A release by NNPC Acting Group General Manager, Group Public Affairs Division, Mr. Samson Makoji stated that on the impact of the project to the national economy, the GMD said it would boost the Federal Government’s revenue by $9bn and generate about 10,000 direct jobs and 40,000 indirect jobs to ease the youth unemployment challenge in the country.

He thanked the Management of the NLNG Limited and the major gas producing companies for their commitment to the development of the project.

Also speaking at the event, Country Chairman of Shell Group of Companies in Nigeria and Managing Director of Shell Petroleum Development Company (SPDC), Mr. Osagie Okunbor, appreciated the NNPC GMD for his purposeful leadership which saw the partners coming together to sign the Gas Supply Agreement.

He, however, urged the partners to look beyond Train 7, adding that it was time to move into action.

On his part, the Managing Director of Total Nigeria who was represented by Mr. Patrick Olima, pledged the company’s commitment to making gas available for the NLNG and executing other big projects in the country like the Egina Project.

The Managing Director of Nigerian Agip Oil Company (NAOC) who was represented by Mr. Massimiliano Bertona also thanked Mele Kyari for the skillful way he drove the process leading up to the signing of the Gas Supply Agreement and pledged the commitment of the company to supplying gas to NLNG.

The Managing Director of the Nigerian Petroleum Development Company (NPDC), Engr. Mansur Sambo, said he was excited at the opportunity of the company joining the elite club of gas suppliers to NLNG and pledged the company’s commitment to meeting the terms of the agreement.

The Managing Director of Oando Plc, Mr Wale Tinubu, on his part, expressed gratitude to the Federal Government for creating policies that encouraged indigenous companies like his to join the league of gas suppliers to NLNG and thank the NNPC GMD for his leadership and support.

Speaking on the buyer’s side of the transaction, the Managing Director of NLNG, Mr. Tony Attah, described the event as a great moment for Nigeria as the gas supply would help consolidate Nigeria’s position in the global NLNG market.

He, however, requested that more needed to be done to get the country to “fly on the wing of gas” in the face of the changing global energy dynamics, adding that NLNG was ready to build more trains if the gas producing companies can supply the gas required.

The highpoint of the event was the signing of the Gas Supply Agreement by all the parties and the signing of Term Sheet for the development of OML 144 by NNPC, SPDC, TEPNG, NAOC and Sunlink.