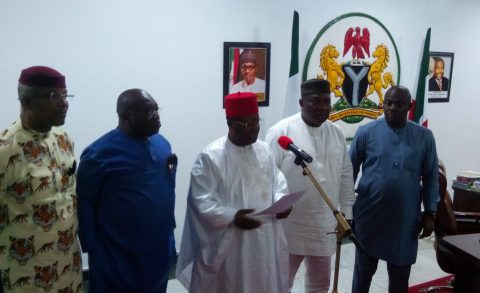 (AFRICAN EXAMINER) – The South- East governors forum has maintained its earlier decision that it has no land for the suspended federal government’s RUGA programme in the south east geopolitical zone.

It said it has reviewed the present security situation in the zone and “in response to the emerging security challenges decided to set up both a committee and centre for south east integrated security monitoring intelligence gathering to be centrally located in Enugu.

Rising from a marathon meeting on Sunday evening in Enugu with an 11-point communiqué read to newsmen by its chairman, and Ebonyi state governor, chief David Umahi, the forum, also resolved to key into the federal government’s community policing programme.

They equally agreed to establish forest Guards in each state of the zone, adding that the states under its jurisdiction are to clear up to 50 meters into the bush with a view to having a clear view of roads ahead.

“The security committee will also address the safety of fuel pipeline routes to Enugu depot to ensure that pumping of petroleum product in Enugu depot resumes in the shortest possible time.

According to the communique, “the south East governors forum also discussed extensively the comparative advantages of agriculture and the attendant benefits in the south east.

“The  forum therefore, resolved to put funds together to fund our people who are interested in rice, cassava, cow rearing, piggery, goat rearing, poultry, fishery, and some other cash crops permitted by our soil”, advising people of the zone who are interested in going into the aforementioned areas to contact their respective states for further engagement.

The forum reviewed the progress of South-East Development Commission (SEDC), nothing that the people of the zone are excited about it, and urged all stakeholders to kindly expedite action to bring the body to a reality.

On the status of the the Akanu Ibiam International Airport Enugu, the governors, commended governor Ifeanyi Ugwuanyi of the state for his numerous interventions in addressing recent concerns raised by the Federal Airport Aviation Authority FAAN, and ensuring that the Airport is functional.

“However, we are highly concerned about the deplorable state of the Airport runway, and we plead with the federal government to consider our numerous requests in reconstructing the runway to enhance the safety of our people.

“The forum noted that Enugu, Anambra and Ebonyi states have abundant oil and gas reserves which have not been fully explored”, calling the federal government to show more commitment and commence intensive exploration and development of the resources in the named states.