Money Laundering: Why US did not Prosecute Akwa Ibom ALGON Chairman Nse Ntuen 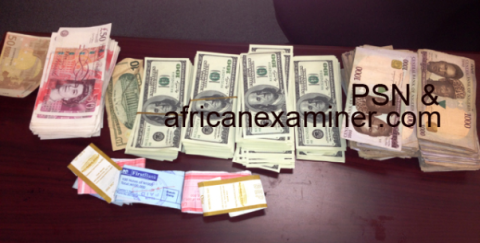 More facts have emerged on why Mr Nse  Ntuen, the Chairman of the Akwa Ibom State Association of Local Governments of Nigeria (ALGON) and the executive chairman of Essien Udlm Local government recently escaped prosecution in the US over money laundering.

Mr Ntuen, a political boy of Gov. Akpabio of Akwa Ibom, who arrived United States on August 15, 2013 from London through Baltimore Washington International (BWI) Airport to attend the
just concluded Annual International Convention of the Akwa Ibom Indigenes in the United States and Canada, lied in the US custom declaration form that he was carrying only $5,000 on him whereas he stashed $44,783 in his hand luggage.

A US customs officer at the airport told our correspondents that the suspect was given multiple opportunities to truthfully disclose the amount of money he was bringing into the United States but
insisted it was only $5000.

Not satisfied with his response and declaration, the officer that reviewed his declaration form and other travelling documents sent him for secondary screening where another officer found 44k on him in bundles of dollars, pound sterling and Nigerian Naira.

Following Ntuen’s failure to declare the money, he forfeits the smuggling money but $500 was handed to him on humanitarian ground to enable him get to his destination.

However, when African Examiner and our Partner, Per second news.com visited the US Customs and border Control office, Officer Steve Sapp later in an email sent to us confirmed that on August 15 there was a money laundering case concerning a Nigerian traveler who flew him from London to US through BWI airport but he will not disclose the name of the passenger.

Officer Sapp explained further that US laws would not allow the release of culprit’s name since he was not prosecuted being a first offender explaining that US laws bar them from prosecuting first time money laundering offenders.

“We did seize $44,783 from a Nigerian man who arrived at BWI on August 15, 2013. He was not criminally charged; however we did seize his currency and released $500 to the traveler for  humanitarian purposes.” Saap stated

It was gathered that Mr Ntuen was made to write and sign a statement accepting that he brought in money in which he failed to declare to the United States Customs and was released after completing all paperwork.

Recall that when the story broke, it went viral on social media. So, Instead of telling the truth about the incident, Mr Ntuen and the Akwa Ibom state commissioner for Information Anieka Umana
shamefully lied to Nigerians and the Akwa Ibom people on both State and National Television that the incident never happened.

Umana described the story as baseless and handiwork of their political enemies in the state while Mr Ntuen said “I was surprise and shock over the stories which never happened.”

Aniekan’s statement backing the disgraced ALGON boss corroborates the insinuation in some quarters that the seized money may have been allegedly smuggled into the US on behalf of Governor Godswill Akpabio who also attended the convention held at the Marriot Hotel in Washington, DC, in which the new Akwa Ibom state SSG publicly donated $50,000 on the occasion
while Gov. Godswill Akpabio told the audience that he would not announce his own donation in public for political reasons.

As at the time of filing the story, the email and text message sent to both Aniekan Umana and Nse Ntuen 2 days ago to react to the story have not been replied.