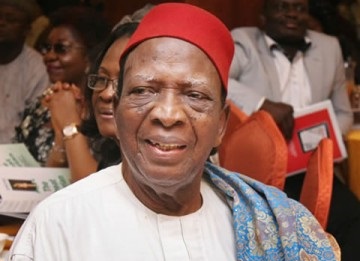 Lagos based constitutional lawyer, Prof. Ben Nwabueze, on Thursday appealed to the Igbo nation to see reasons with him and former vice president, Alex Ekwueme, on why the they can not attend the forthcoming national conference, scheduled to take place in Abuja. 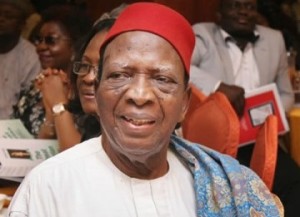 The elder statesman, who tendered unreserved apologies to Igbos on behalf of Ekwueme, however, attributed their resolve not to participate in the CONFAB to their old age.

The Anambra state born octogenarian, explained that their rejection of the appeal to lead Igbo delegates to the proposed national conference was born out of the fact that they would not have the strength to cope with such hectic exercise.

He disclosed this at Zodiac Hotels Enugu, during a public presentation of two booklets, entitled “The Position of the Igbo Nation at the National Conference for a Renegotiated Constitution”, compiled by the Igbo Leaders of Thought.

The group is made up of eminent Igbo think-thank led by Prof. Nwabueze.

He hinted that he agreed with Dr. Ekwueme that both of them would not be delegates to the conference “due to age and to also give the younger ones a chance to participate.”

According to him, the Igbo Leaders of Thought advocates for the right of the zones to form the basis for the federating units and the rights of self-determination, including the right to secede.

He said that while he is 83, Ekwueme is about 81 or 82 years of age, and that both of them had taken part in previous constitutional conferences in the past and made their contributions.

The former minister of education also stated that they will reach out to Igbo governors and other prominent Igbo sons to provide a meeting place in Abuja, where Igbo elders like him and Ekwueme would be meeting with Igbo delegates to the conference twice a week, to guide and educate them on the Igbo position as contained in the document.

On the summary of some of the contents of the Igbo position paper, Prof. Nwabueze said that Ndigbo is proposing the inclusion of the right of secession or self determination in the new constitution; adoption of the regions as the basis of the federating units and establishment of regional or state police to enable the governors or regional leaders enforce their authority and law.

He said that the position paper reduced the items in the exclusive legislative list as currently contained in the 1999 Constitution, from 68 to 36, adding that the current constitution is abhorrent to true federalism where a commissioner of police has overriding power over a state governor and chief security officer of the state.

The right of self-determination, he said, is contained in the African Charter on Human and Peoples Rights, which he said was domesticated into the Nigerian Constitution by National Assembly enactment.

“In this document we are proposing the rights of the zones as the federating unit to self determination, including the right to secession… the Yorubas have already accepted it, they are coming to the conference with this. Its part of the law of the country already because the African Charter on Human and Peoples Rights, says that all people shall have an unquestionable and inalienable rights to self determination.

“So its nothing new; all that we are now saying is that it should be elevated from being part of the ordinary law of the country into a right enshrined in the constitution, that’s all that we are saying now,” he buttressed.

Secretary of Igbo Leaders of Thought and former Director – General, National Orientation Agency NOA Prof. Elochukwu Amaucheazi, in his remarks stressed that initially Ndigbo were worried by the refusal of Nwabueze and Ekwueme to be at the conference, but expressed happiness that the two elders have now agreed to remain behind the scene to give support.

He said that that his group wants Nigeria to remain strong and united but on the basis of justice and equity.

Evangelist Eliot Uko, the Assistant Secretary of Igbo Leaders of Thought and president of Igbo Youth Movement IYM, in his speech remarked that the content of the Igbo position as presented in Booklets was futuristic and that millions of copies would be mass produced with a view to distributing freely to Ndigbo, both at home and Diaspora, as critical Igbo agenda in Nigeria.

Present at the book presentation were  other members of the group including Senators Anyim Ude, senator  Offia Nwali, Prof Chinweite Ejike, amongst other personalities in Igbo land.