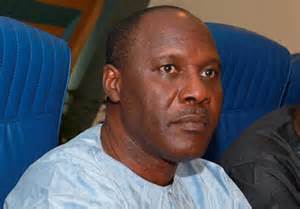 By Niyi Adeyi -A Chieftain of the ruling PDP and Former Minister of Niger Delta Ministry, Elder Godsday Orubebe, has denied social media comment attributed to him that he had dumped his party, the ruling PDP for the opposition APC.

Orubebe said in his reply that the comment which went viral on different social media handles Tuesday afternoon and attributed to him on a Twitter account – @ElderGOrubebe, was completely false.

He held that the comment was absolute nonsense, insisting that he was a believer of the “PDP and remained committed to his boss, the outgoing President Goodluck Jonathan.

The text of denied tweet linked to him read “I have concluded plans to join my folks in the APC to champion and sustain the movement for a better Niger Delta in the new administration.”

Elder Orubebe, it would be recalled, created a scene on March 30, 2015, at the International Conference centre, Abuja, which is the venue of national collation of the last Presidential election, when he made a criminal attempt to disrupt the ongoing results collation, adducing spurious allegations against the INEC Chairman, Professor Attahiru Jega over compromising the exercise with the opposition APC.

Reports also have it that there was a sinister but failed plan by him and stand by militants to abduct the INEC boss, thus bring the March 28 Presidential election to an abrupt end, to repeat the June 12 1993 Presidential Election.