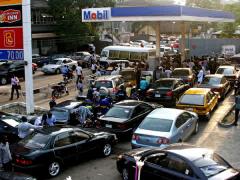 The artificial fuel scarcity that started in entire Imo State two months ago like a child’s play has worsened, as heavy  long  queues have returned again to filling stations in different parts of the state.

A litre of Premium Motor Spirit (PMS) petrol is sold for between N150 to 200 per litre in different areas of the state includin Orlu, Okigwe, Owerri and other places visited by our correspondent on Saturday.

When our correspondent visited Okigwe, Port Harcourt and Egbu Roads in Owerri, he noticed heavy queues  in the few filling stations which opened for business in the town, while scores of them were under lock and key.

It was also observed that Most of the filling stations which opened were not selling to customers because of shortage of supply.

At total filling station along Douglass road, both commercial and private motorists were seen waiting endlessly for the product while many other stations were shut against customers.

At Aba Road, there were long queues at the Chibyke and Frank-Gilly filling stations located along Mechanic Village as well as that of Wetheral Junction by Aba Road respectively

Similarly, there were intimidating long queues at the Ebere Links, a filling station located both at Item Street in Ikenegbu and on Port Harcourt Road.

Meanwhile, the scarcity has continued to make life unbearable to Imo citizens, especially motorists, as scores of them are left stranded at filling stations nearly on daily basis.

Our correspondent observed that the Nigeria National Petroleum Corporation  NNPC mega  stations that are selling fuel at the official price of N97 in some cities within the state were overwhelmed by the queues.

A motorists, who gave his name as Mr. Joshua Ibe, decried the situation, saying “I’m just coming from Ondo State today and we bought fuel at the normal price of N97 there but here I bought for N125 and some are even saying I got it cheaper at that price. Why should there be such a huge discrepancy”, he queried.

An official of one of the filling stations in Akwakuma, Chippet Oil, who does not want to be quoted , told  our correspondent that they had been instructed to stop selling PMS.

According to him,  this was as a result of the continued shortage in the supply of the product from the main depots in Aba, Calabar and Port Harcourt

Meanwhile, resident of the state have called on management of NNPC and Department of Petroleum Resources DPR to come to their rescue, as the ugly development has continued to make life difficult for them.

Mrs. Edith Emeribe, a secondary school teacher in Urualla community, in Ideato North local government area of the state, who also spoke with African Examiner, called on Governor Rochas Okorocha to use his office to intervene in the matter, saying the development has led to 50 percent increase in transportation by commercial drivers.