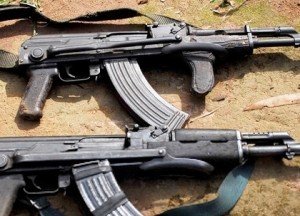 The suspect according to the police, has been terrorizing Trans-Ekulu axis of the state and its environs.

Ebere Amarizu, the state police public Relations officer, PPRO, who made this known to newsmen in Enugu, gave the name of the suspect as Onuorah Ekwunife of No 68, Ugwunwani Street, Abakpa-Nike Enugu.

The hoodlum, he said, was nabbed by the operatives following intelligence report received about him and his gang.

According to the state police spokesman, the suspect and his gang had been engaging in various forms of nefarious activities such as armed robbery and car snatching within Phase Six axis of Trans-Ekulu and  environ.

The suspect is now helping the operatives in their further investigations “as he has been giving clue about their armed robbery operations including how they allegedly attacked some residents of medical road of Phase Six Trans-Ekulu Enugu  on 20/12/13.

The alleged criminal, Amarizu said, has also revealed identities of some of his gang members including the gang leader whom the operatives have already intensified manhunt on.

Item recovered from the suspect include a Toyota Camry with registration number LSR 205 CF suspected to be stolen.

Meanwhile, the state Commissioner of Police Adamu Mohammed Abubakar has applauded the effort of his operatives and that of the members of the public concerning their timely and useful information to the police, and assured that the command continue to provide functional security to the state before, during and after the festive period.

He said the command has put some strategies in place to make Enugu and its environs safe and secured.