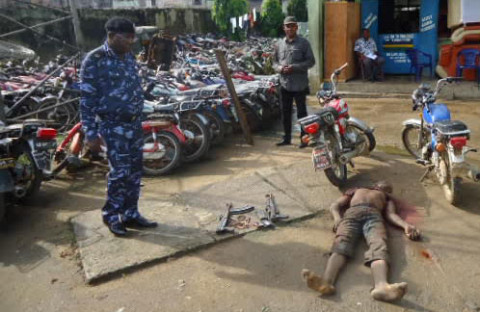 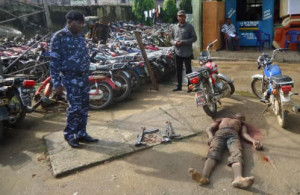 The Police in Aba city, Abia state, Monday invaded a kidnappers hideout at Umudaba village in Osisioma council area of the state, where they shot dead one of the hoodlums during exchange of gunfire, while three others fled with bullet wounds.

The four-man gang, operating in a Hilux van with an undisclosed Abuja registration number, had last Sunday abducted an Aba based businessman at a barbing salon located at No. 36 Omenazu Street in Aba.

Briefing newsmen in his office, Aba Area Commander of the Nigeria Police, Assistant Commissioner ACP Rabiu Dayi, said his men swung into action immediately they received a distress call that kidnappers had struck at the area.

According to him, the security operatives, traced the kidnappers to the family house of one Nwakanma, along the Aba section of the Enugu- Port Harcourt highway, which they have been using as their hideout.

The ACP, said his men overpowered the kidnappers after an exchange of fire, saying one of them fell to the superior firepower of the police while three others fled with bullet wounds.

Hear him: “When we got to the hideout after the exchange of gunfire, we saw the businessman chained hands and feet”.  “From information available to the police, somebody in Abuja bought this Hilux jeep for them, We are closing on them, because they have no place to hide unless they relocate.” The police officer declared.

Items recovered from the kidnappers’ hideout includes two AK 47 with 49 rounds of live ammunition each, two motorcycles and handsets.

Dayi said, “The businessman was at the salon to barb when three  members of the gang entered the place, pretending to have come for hair cut, but suddenly, pulled out their guns and pointed it at the man and immediately took him away.

“When we traced them to their hideout in a village at Osisioma Ngwa local government along the Expressway, they opened fire on the police but we subdued them and rescued the victim unhurt.”

ACP Dayi, further disclosed that the kidnappers before now, had been operating in some areas of Imo state such as Nekede and Orlu, where they abduct people and move them to their hideout in the village along the Express road.

The Area Commander however, called on residents of the city to watch out for people with bullet wounds and report it to the police.

“Residents should assist us with information about criminals. The Ember months are here, we are assuring residents that if they provide useful information, we will storm any hideout within 5 minutes.,” he promised