Police Take Over Emir of Kano’s Palace , As Protests Escalate 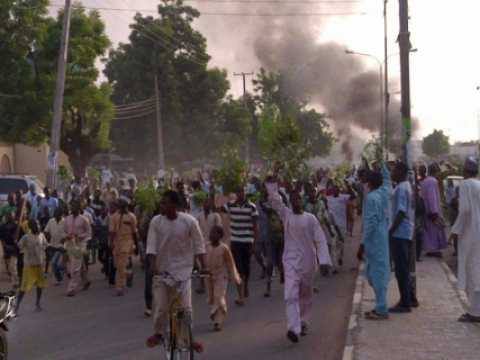 The Police yesterday took over the Emir’s Palace in Kano, following continuation of the protest that greeted the announcement of former Central Bank Governor, Sanusi Lamido Sanusi as successor to late Ado Bayero, who died last Friday.

The ruling party in the state, the All Progressives Congress, APC, however, accused the Peoples Democratic Party, PDP, of inciting violence in an attempt to destabilise the state. The party urged the Kano State Attorney-General to prosecute all PDP officials allegedly involved in the act. The PDP, however, yesterday congratulated Sanusi as the new Kano emir.

The protests notwithstanding, the new Emir was, yesterday, presented with his appointment letter and staff of office by Governor Rabiu Musa Kwankwaso.

Kano : Supporters of the newly appointed Emir of Kano hold a demonstration march in his support in the ancient northern Nigerian city of Kano, on June 9, 2014. Nigeria’s new Muslim monarch, the Emir of Kano, was sworn in today, after a second day of violence fuelled by suspicions that politics, not religion, was behind the appointment. Thousands of well-wishers turned out at the Kano state government headquarters as Sanusi Lamido Sanusi was given his official letter of appointment to the influential role by Governor Rabiu Kwankwaso. AFP PHOTO

Kano : Supporters of the newly appointed Emir of Kano hold a demonstration march in his support in the ancient northern Nigerian city of Kano, on June 9, 2014. Nigeria’s new Muslim monarch, the Emir of Kano, was sworn in today, after a second day of violence fuelled by suspicions that politics, not religion, was behind the appointment. Thousands of well-wishers turned out at the Kano state government headquarters as Sanusi Lamido Sanusi was given his official letter of appointment to the influential role by Governor Rabiu Kwankwaso. AFP PHOTO

Irate youths opposed to the appointment of Sanusi as the 14th Fulani Emir of Kano by Governor Kwankwaso took to the streets again, yesterday, forcing the closure of private and public schools. The youths in their hundreds seized the Emir’s Palace Road, made bonfires at strategic points on the highway, while motorists were forced to divert to other roads. The protesting youths, clutching tree branches kept chanting “bamuayi”.

A contingent of anti-riot policemen was drafted to the palace to dislodge the protesters. The palace was then placed under security cover as only female visitors were allowed to enter into the centuries-old palace. This has now cut short the week-long mourning of the late Emir.

A security source in Kano told Vanguard that “the measure adopted by the Police was to ensure that the palace was not destroyed and also to keep the artefacts in the palace intact”. The source said: “Our presence here would certainly check protesters, who have used the palace as rallying point for two days running now”.

In the meantime, business activities continued unhindered at major centres like Kasuwan Kwari, Kasuwan Singer and Kurmi market, while roadside traders along the road leading to Government House returned to business following restoration of normalcy by the police.

A number of schools remained shut in the city, while adequate security was provided for banks to operate.

In Sabon Gari, a predominantly Christian quarters, business activities suffered hiccups as most shop owners chose to remain at home to avoid being victims of looters.

Commenting on the development, Police Public Relations Officer in Kano, ASP Magaji Musa Majia said: “Yes, we have some security challenges at hand but we have adopted counter measures to address the problem”.

He appealed to residents to remain calm and enjoined them to go about their legitimate businesses without fear of molestation.

Meanwhile, APC has accused the PDP of inciting the violence that followed the announcement of Alhaji Sanusi as the new Emir of Kano.

It wondered why a ruling party, which has access to Kano or any state government, would rush to the media to congratulate a contender who had not been selected, without even contacting the selecting authority to ensure the veracity of whatever news it may have heard.

“What is so urgent about congratulating the new Emir that could not have waited for a few hours for the appropriate authority to make an official announcement”, APC queried.

The party said when the announcement was eventually made and the contender who had already been congratulated lost out, it was only natural that his supporters would feel shortchanged.

“It is therefore obvious that the PDP, through its National Publicity Secretary went out of their way to stoke the fire of violence in Kano.

Rioters light fires on the streets of northern Nigeria’s ancient city of Kano in protest over the appointment of Nigeria’s former Governor of the Central Bank Sanusi Lamido Sanusi as the new emir of Kano, on June 8, 2014

Rioters light fires on the streets of northern Nigeria’s ancient city of Kano in protest over the appointment of Nigeria’s former Governor of the Central Bank Sanusi Lamido Sanusi as the new emir of Kano, on June 8, 2014

“Since we live in a country which is being governed by the rule of law, the best option open to the Kano State government is for the State Attorney-General to immediately initiate criminal proceedings against PDP and its officials for incitement. Whatever explanations they have for their premeditated actions, they should reserve for their defence in court ,” APC said.

Kano State Government has, meantime, issued appointment letter and presented staff of office to the new emir. The presentation which was held at the Government House, Kano was attended by top government officials, stalwarts of APC, opinion leaders, and business moguls in the city.

No members of the late Bayero’s family, however, attended the colourful ceremony, and no explanation was given for their absence.

Speaking during the ceremony, Governor Kwankwaso disclosed that the new emir’s wealth of experience and his deep-rooted connection with the ruling house gave him an edge for the exalted seat.

Kwankwaso dismissed insinuations that the new emir’s appointment was influenced by political leaning , stressing that “the new emir was appointed on merit.”

He disclosed that the former CBN Governor made the shortlist of qualified contenders submitted to government for consideration, maintaining that he was never smuggled into the list contrary to insinuation in the social circle.

The governor said: “I must clarify that the six contenders to the throne are good friends and it remains a statement of fact that only one would emerge”.

Kwankwaso, therefore, enjoined the new emir to adopt the culture of inclusion to solidify the existing unity among the ruling class, as he disclosed that Government has built an estate for the family of late Bayero at Sharada area of the municipality.

He further revealed that Government would soon embark on the rehabilitation of the palace, preparatory to the resumption of the new emir.

In his acceptance speech, the Emir of Kano, Alhaji Sanusi Lamido Sanusi was full of praises to God for making him the 57th Emir of Kano and the 14th Fulani Emir of Kano emirate.

The highly elated emir revealed that he enjoyed the best support from members of the ruling House, stressing that there is no rift between him and other princes and princesses in the ruling House.

He said: “I was close to the late emir than I was to my late father. My first wife of 20 years is Bayero’s daughter. I grew up under his care and shared bed with Turakin Kano, Nasiru Ado Bayero for 10 years”.

He appealed to his subjects to remain calm and admonished them not to allow external forces to destroy their home for no reason.

All the four kingmakers who were present during the official presentation of staff of office and other traditional rulers bowed before the new emir in his recognition and acceptance as the traditional leader of Kano emirate.

The ruling Peoples Democratic Party (PDP) has congratulated the new Emir of Kano, Mallam Sanusi Lamido Sanusi on his inauguration, saying it will

not play politics with the revered traditional institution.

The party in a statement issued by its National Publicity Secretary, Chief Olisa Metuh said it expected the new emir to be non-partisan, noting that his status in society has changed.

The party in the statement issued late yesterday, said the party “has an unflinching reverence for the traditional institution and in that regard extends the same reverence it had for the late Emir to Mallam Sanusi Lamido Sanusi.”

Also, General Muhammadu Buhari has urged the new emir to serve in the knowledge that he was elevated by God and not man.”You should cultivate all and exclude none,” Buhari said in a statement yesterday.

In a letter, the Governor said: “It gives me great pleasure on behalf of the good people and Government of Edo State, to congratulate Your Royal Highness on your well-deserved appointment as the 57th Emir of Kano.

“Your Royal Highness, I have no doubt in my mind that your appointment to this esteemed position of Emir of Kano Emirate is ordained by Almighty Allah.”

It is my sincere prayer that your reign will be long and be for the good of all Nigerians, particularly in serving as a vessel through which the much-needed socio-economic upliftment, mutual understanding and peaceful co-existence amongt Nigerians, within and beyond the Kano Emirate will be sustained.