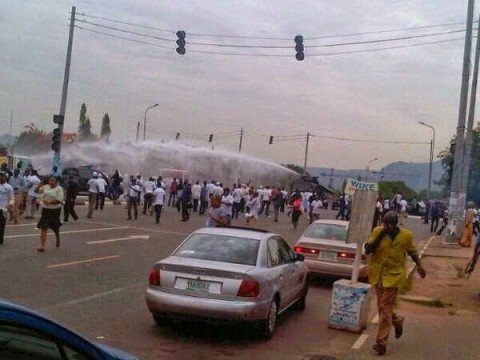 Police Teargas Polytechnic Lecturers In Abuja  The Nigerian police Tuesday fired tear gas canisters at protesting polytechnic lecturers who engaged in a peaceful protest to force the Nigerian government to have dialogue with the lecturers relating to their demands. 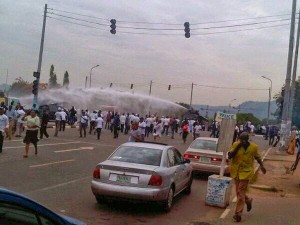 The lecturers and some polytechnic students gathered at the federal Secretariat in Abuja to ask for reopening of Nigerian polytechnics whose lecturers had embarked on strike since last year.

The Polytechnic lecturers first gathered at the Eagle Square early this morning to protest non implementation of the agreement made by the both Academic Staff Union of Polytechnic (ASUP) and the Federal Government.

The protesters later marched down to the Ministry of Education, wherer Minister of Labour Emeka Wogu addressed the protesters and promised that their grievances would be addressed.

The minister appealed for patience and understanding from the lecturers.

However, dissatisfied with the promise, the peaceful rally later headed toward the National Assembly complex where a protest letter was billed to be submitted to both the Senate and House of Representatives leadership.

Armed policemen fired tear gas canisters at the protesters and used hot water hoses to disperse the crowd. The polytechnic lecturers vowed not to leave until they submit their protest letter to the leaders of National Assembly.

The lecturers have been on strike for ten months.