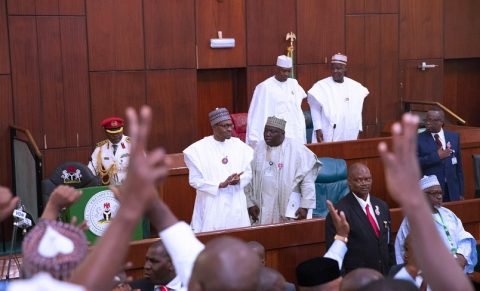 (AFRICAN EXAMINER) – Amid cheers and boo, President Muhammadu Buhari has laid the 2019 appropriation bill before the joint session of the National Assembly for consideration.

Buhari who noted that his administration focused on completion of the abandoned infrastructures reviewed the economic developments in the last three years, with particular reference to 2018.

He admitted that the last three and half years have been challenging both at home and abroad.

President Buhari announced that the factors have contributed to exchange rate stability.

However, the accounts were opposed by the opposition Lawmakers who shouted no! no! as well as booed him.

At a point, the President cautioned the opposition Lawmakers, reminding them that the world was watching the live session.

He spoke further by saying that in the railway sector, his administration has completed the Abuja-Kaduna rail line and the Abuja metropolis rail line.

The Ajaokuta-Itakpe and Lagos-Kano rail line he said are on course, while a significant progress has been made on the Lagos-Ibadan part of the project.

While saying earlier that all the states of the federation has a major Federal projects that is ongoing, he added that the federal government has awarded the contract to dualise the Mokwa-Jebba road.

Meanwhile, our correspondent reports that a rowdy session followed after Buhari finished his address, as the shouts of ‘’four more years’’ and ‘’no more years’’ by pro and anti-Buhari Lawmakers respectively rented the air.

The lingering and uncontrollable development prevented both Saraki and Dogara from responding to Mr. President proposed budget presentation.

Having watched the unexpected scene which lasted for more than 10 minutes, the Presidential Guards Brigade band suddenly played the National Anthem, while Buhari was still seated.

What then followed was the singing of anthem, thus the event came to an abrupt end.  After, security operatives whisked Buhari out of the Legislative chamber.