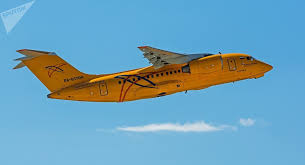 A Russian airliner has crashed after leaving Moscow’s Domodedovo airport, killing all 65 passengers and six crew on board.

The Saratov Airlines jet vanished minutes after take-off and crashed near the village of Argunovo, about 80km (50 miles) south-east of Moscow.

The cause of crash is unclear. Investigators and emergency crews are working at the snow-covered site.

The Antonov An-148 was en route to the city of Orsk in the Ural mountains.

Pieces of wreckage and bodies were found spread over a large area. One of the flight recorders has been recovered, officials say.

Flight-tracking site Flightradar24 said it then descended at the rate of 1,000m (3,300ft) per minute.

Eyewitnesses told Russian media that the jet was on fire as it plummeted.

Investigators said the causes they were considering included weather conditions, human error and technical failure – but they did not mention the possibility of terrorism.