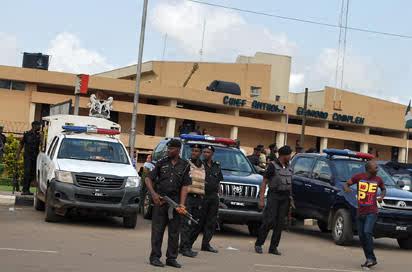 The security men were said to have trailed the vehicle to the boundary between Ebonyi and Enugu states after a tip off.

Our Correspondent learnt that the five suspects including a lady (names withheld) were allegedly intercepted in a commercial vehicle during a stop and search operation conducted by the said security operatives.

AFRICAN EXAMINER gathered that the suspects were en-route Enugu via Abakaliki and were allegedly heading to Cross River state, South- South Nigeria, through Ebonyi state border.

A Source who ran into the gory scene but craved anonymity disclosed that immediately the sack bags were opened the suspects made attempt to take to their heels, but were shot on their legs by the security operatives so as to restrain them from escaping.

The source also alleged that the human heads were displayed on the highway a development that halted free vehicular movement for several hours.

It was further gathered that after arresting the suspects, the security operatives whisked them away to an unknown destination

However, the Ebonyi State police command and state’s DSS command were yet to make any official statement on the situation , as the Police Public Relations Officer (PPRO), Jude Madu, said the command has not received any information to that effect.

He promised the police would definitely react once it received any information concerning the incident.