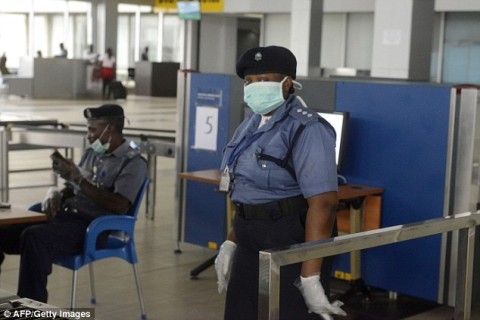 A South African national on transit at the Murtala Muhammed Airport, Lagos, has been held and screened for Ebola after showing potential symptoms of the disease.

The South African woman, who flew in to Lagos from Morocco, according to reports, had worked in Guinea and Sierra Leone.

She was being treated as a suspected case and was being taken to Lagos’ Ebola treatment center for tests to see whether she actually had the virus.

The traveler, who lives in Cape Town, filled out a health questionnaire on her arrival at Lagos in which she acknowledged suffering from diarrhea and vomiting, both possible symptoms of the Ebola hemorrhagic virus.

The director of Port Health Services at MMA, Dr. Morenike Alex-Okoh said the testing process was likely to last a few days.

“This person has been in Guinea and Sierra Leone since April … she has symptoms,”

Marty is working with Nigerian health authorities, under the auspices of the World Health Organization (WHO), to maintain port of entry Ebola checks across the African oil producer.

She said the fact that the South African traveler displayed several Ebola-like symptoms and had been in the high-risk zone justified her being treated as a suspected case. But such symptoms are also present in other diseases, such as malaria and cholera, hence the need for a specific Ebola test.

Around 2,300 people have died so far this year in the worst Ebola outbreak on record which has mostly affected Liberia, Sierra Leone and Guinea. It has also reached Nigeria and Senegal because of sick travelers “importing” the disease. Democratic Republic of Congo has a separate outbreak.